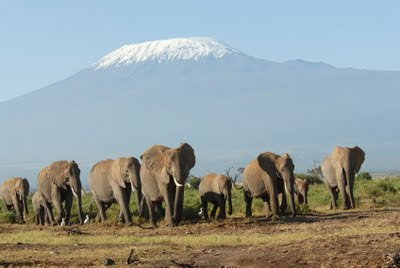 A few years ago, I traveled to South Africa and spent ten days on safari in the Kruger National Park and Sabi Sand Reserve. Spending time with African wildlife in their natural habitat was life-changing and instilled a strong desire in me to support wildlife conservation and contribute in positive ways to raising awareness on wildlife issues. I then traveled to Tanzania with World Wildlife Fund on a members field trip tour of four major conservation areas, including the World Heritage Sites of the Serengeti and Ngorongoro Crater. These East African ecosystems contain two of the most significant concentrations of wildlife remaining in the world. To witness the astonishing spectacle of the wildebeest migration in the Serengeti, where two million herbivores migrate yearly through the ecosystems of the Serengeti and Masai Mara Reserve in Kenya, on their quest for food and water was one of the most amazing experiences of my life. I wrote a fairly long field trip report (which earned me a bunch of university credits :-) ) and some of the highlights and pictures will be posted here over the next few days. 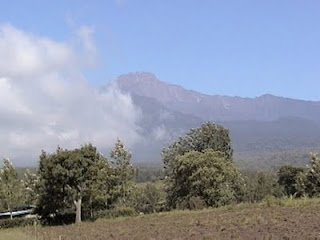 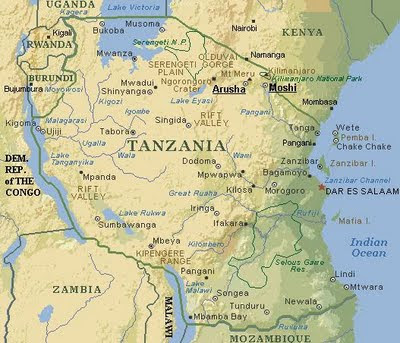 The common species that we observed in all of these regions included herbivores such as wildebeests, various types of antelopes, zebras and giraffes. We observed elephants in all parks except in Arusha and two rare black rhinoceros were observed in Ngorongoro Crater. Predators such as lion, leopards, cheetahs and hyenas were observed in Tarangire, Ngorongoro and the Serengeti.

Arusha National Park
Our safari field trip began with visiting Arusha National Park. This small, lush park is set in a 53 square mile area that includes Mt. Meru, a dormant volcano, Ngurdoto Crater, an extinct volcanic caldera, equatorial forest, and the alkaline Momela Lakes. We were fortunate to get a view of snow capped Mt. Kilimanjaro in the distance to the east as we arrived near the entrance of the park. Kilimanjaro at 19,341 ft., is the highest mountain in Africa.

The ecosystem of Arusha National Park contains a variety of features including equatorial forest that support rare black and white colobus monkeys, blue monkeys and red forest duikers. Our first sightings in the park were of giraffe, warthogs, zebra and cape buffalo, all together on a small plain area known as the Little Serengeti. Predators are rare as there are no lions, however, a few leopards and hyenas reside in the area. Arusha National Park used to be famous for its rhinocerous population, however, due to poaching, none remain in the area. 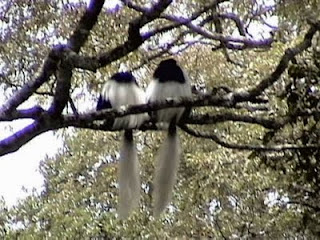 Primates
The main reason for our visit to this park was to observe the black and white colobus monkeys and to go on a guided bush walk. As we drove through the forest we came upon three of the colobus monkeys. They have long, black and white hair and were engaged in their grooming activity. Each was engaged in grooming another. At one point, one lay horizontal on the branch so that the one performing the grooming could have easier access to its stomach and hind areas. We spent some time in our vehicles observing them. Our presence nearby did not deter them and they did not disengage from this activity the whole time we were there. 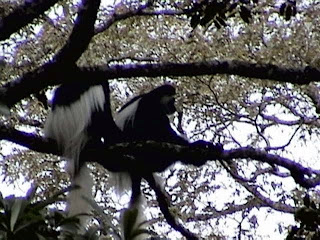 Antelopes
An interesting antelope that we were able to observe in this park was the Red Forest Duiker. A small antelope, about three feet tall, they have red coloring on their body and black around the back of the head and tail. They are a forest dweller and are not seen on the plains. We came upon two of them as they were foraging in the forest. 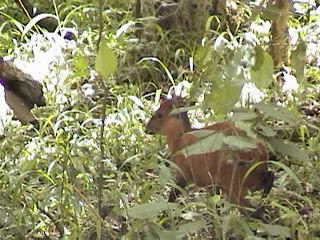 Wild Cattle
After lunch at the Momela Lodge, built for the filming of the John Wayne movie "Hatari" back in the 1950’s, we took a side trip to a hippo pool and caught sight of a couple of elusive hippos who didn’t give us a lot of chance to see them, as they were submerged in the water.

A highlight of the trip to Arusha National Park was the opportunity to go on a bush walk. Guided by armed rangers, we walked close to a herd of cape buffalo who were grazing. A massive bovine species, cape buffalo are considered one of the most dangerous species to humans in Africa. 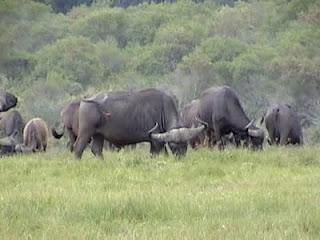 They have a tendency to charge and can easily overpower an opponent when they feel threatened and use their thick, sharp horns to inflict damage. The herd stayed close together which is a method of protecting themselves and their calves from predators such as lions and hyenas. 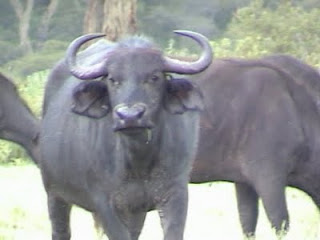 Giraffes
We observed several giraffes in the park. These tall ruminants tower over all other species reaching heights of up to 18’. They were feeding on the tops of acacia trees with their long tongues that can reach tree branches as high as 19’. 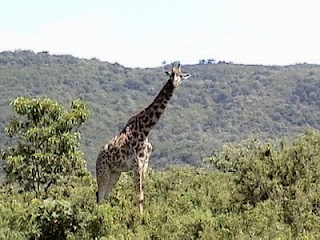 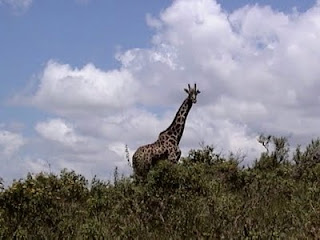 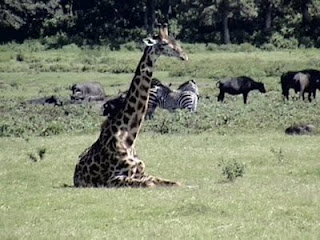 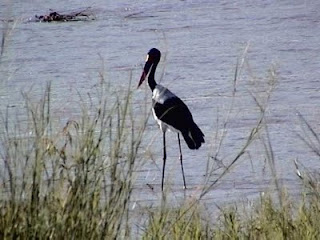 Posted by Kathy Stanley at 3:18 PM