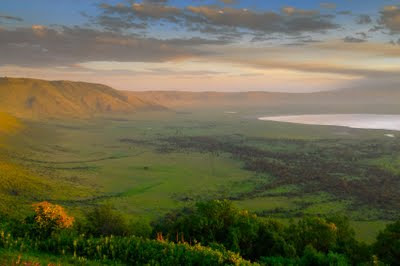 Leaving Tarangire, we drove through the Rift Valley and climbed the eastern wall of the Great Rift Escarpment up into the foothills of the Ngorongoro Highlands. We stopped at a look out point to view Lake Manyara, a large soda lake of 200 sq. km and then on into the highlands past farms with coffee, maize and banana crops. The Ngorongoro Highlands are the ancestral home of the Maasai people and we met them at rest stops selling their bright red blankets and passed them herding their cattle and goats through the area. 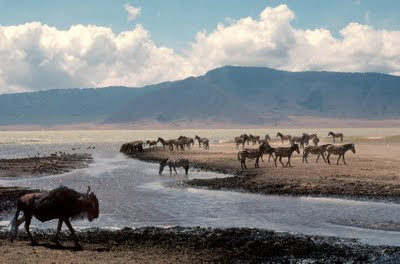 Encompassing 8,300 sq.km. the Ngorongoro Conservation area contains the famous Ngorongoro Crater (considered the “Eighth Wonder of the World”), Olduvai Gorge, and Laetoli, which together contain some of the richest archaeological sites for early hominids. The conservation area also contains the only active volcano in East Africa: Ol Doinyo Lengai (Mountain of God in the Maasai language), Olmati Crater, and the Northern Highlands Forest Reserve. Ol Doinyo Lengai recently erupted in September 2007 after a 40 year period of dormancy.

While called a crater, Ngorongoro Crater is more properly a caldera, 12 miles wide which was formed when the volcano collapsed inward on itself two million years ago. The soil is rich from volcanic ash and this supports the caldera’s approximately twenty thousand resident herbivores, elephants, black rhinoceros, hippopotamus, predators, primates, and birds. According to National Geographic’s video Africa’s Animal Oasis: “Ngorongoro is the very core of Africa. . . It’s as if all the continent was contained in a capsule. . .a latter day Eden.”
The National Audobon Society Field Guide to African Wildlife confirms: Its rim, which averages 7,600’ elevation, is cloaked in moist montane forest and grassland, hosting elephants, golden-winged and eastern double-collared sunbirds, stonechats, and Jackson’s widowbirds…At 5,600’ elevation, the crater floor is primarily grassland, with patches of spring-fed marshes, freshwater ponds, a salt lake and small forests. Harboring 20,000 large animals, it is a virtual Noah’s Ark (without giraffes). 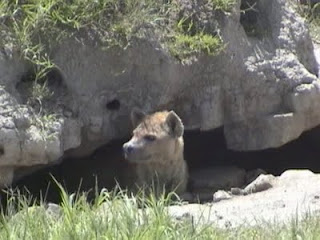 Ngorongoro Crater was designated a World Heritage Site by UNESCO in 1978 and an International Biosphere Reserve in 1981. It is an incredible place to visit, for its sheer beauty, the animal haven that it is, and for its geological and historical importance. Our lodge was situated at the rim and I enjoyed spending time on the terrace at sunset and sunrise deeply imbibing the energy that emanates from this ancient and pristine volcanic crater. This is a special and very unique place on Earth, a magical place for nature-lovers to experience. It was also fun to use the binoculars and spot the animals on the crater floor. We spotted Black Rhino and Elephants fairly easily from the rim. After lunch at our lodge on the rim, we took a drive down into the Crater. We came upon warthogs, Thomson and Grant’s Gazelles, zebras, jackals, wildebeests, Coke’s Hartebeests, cape buffalo, lions sleeping on the side of the road, hippos in the lake, elephants, a leopard sleeping in a tree, a tawny eagle, marabou storks, lesser and greater flamingos and European Rollers. 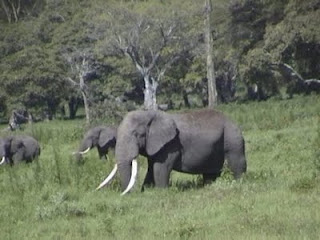 Our two days spent in Ngorongoro Crater was a major highlight of the trip and we had good opportunities to observe many of the herbivores. Unlike the herbivores of the Serengeti, the wildebeests, zebras and gazelles in the Crater are residents and do not migrate beyond the Crater walls. The Crater provides an abundance of food and water and consists of savannah plains, a forest where elephant are seen and a large lake that supports hippopotamus and water fowl such as flamingoes. We also saw two black rhinocerous and our guides said that there are sixteen of them residing in the Crater. Due to the threat of poachers, the rhinocerous are checked on and counted each day by the park rangers. The population of rhinocerous in Tanzania has been decimated in the past by poaching as the horns fetch enormous sums on the black market in Asia. 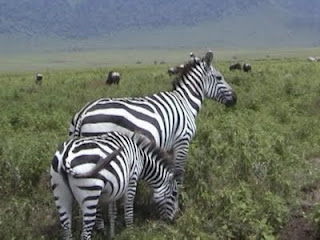 We stopped and watched a herd of zebra with young ones. There was a young baby that seemed to have lost its mother and was calling for it. We were glad to finally see the reunion of Mom & baby. We also came upon a group of wildebeests with young calves. There were 3 Moms with calves who had just been born – they were literally hours old. The calves would stumble to their feet and prance around and then fall back down. And then get up again and do more prancing. One baby mistook a nearby wildebeest for its Mom and we watched as Mom came and gently guided the baby back to her. February is calving season for the wildebeests, therefore an ideal time to see this. 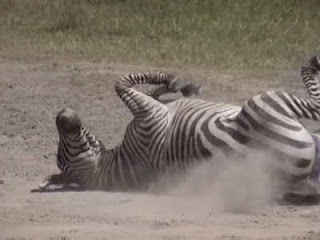 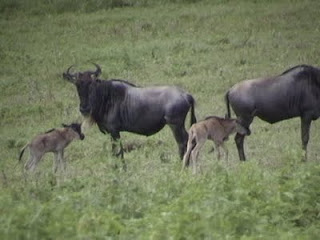 We then came upon 2 lion cubs about 6 months old. They were in some tall grass by the side of the road. They held us captive for a while as one decided to use our Land Rover for shade. We also saw hyenas today. One was sunning itself by the side of a pond and then we saw another one in its den. On our way out of the Crater, we stopped to watch a large troop of baboons who were sitting on a dead log by the side of the road. I think they were checking us out more than we were checking them out. There were several young ones frolicking around and they were very funny to watch.

In the Crater, we also observed a large monitor lizard, warthogs, hyenas The Crater proved to be an amazing self-contained ecosystem teeming with animals. 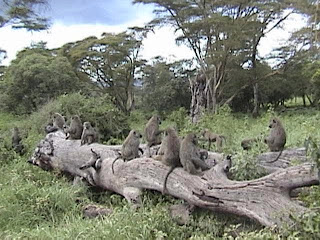 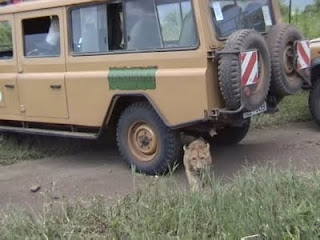 Posted by Kathy Stanley at 1:36 PM