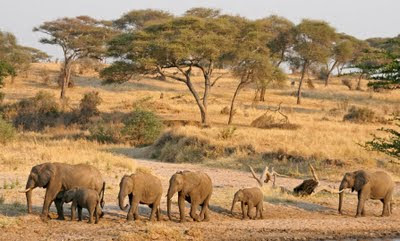 From Arusha, we traveled south to Tarangire National Park. The scenery was spectacular with the Great Rift Escarpment to the west and the wide open spaces of the Rift Valley and the Maasai Steppe to the south. The Great Rift Escarpment is a fault in the earth’s crust that was formed twenty millions years ago and extends from the Middle East to Mozambique. According to The National Audobon Society Field Guide to African Wildlife:
“Temporary” features in geological time, rift valleys form when a landmass is splitting apart due to the divergent movements of tectonic plates. When the plates separate, the land in between drops, forming a rift in the earth’s crust. Africa’s rift valley is a long strip of land extending from the Dead Sea Area of Israel and Jordan south to Mozambique that is gradually dropping in elevation, causing the areas on either side to rise. The resulting friction has spawned volcanoes on the sides of the valley in certain areas. (30)

We passed Maasai cattle herders and bomas along the way and also came upon a flock of sacred Ibis birds with grey herons and also white European storks, a migratory bird from Europe.

Tarangire comprises approximately 2,600 sq.km. and is noted for its population of elephants (largest in Tanzania) and other herbivores. During the dry season, from July to November, the park receives herds of elephant, zebra, buffalo and gazelle that migrate in from the Maasai Steppe. The herds are drawn to the Tarangire River which is a main water feature of the ecosystem. Other interesting features of this park include baobab trees which store water in their expansive trunks, acacia woodlands, savannah, and plains

As soon as we drove into the park we saw a couple of small elephant herds taking shade from the sun under the big baobab trees for which Tarangire is renowned. We also saw Coke’s Hartebeests, a tall high-shouldered antelope with a long narrow head common in East Africa. 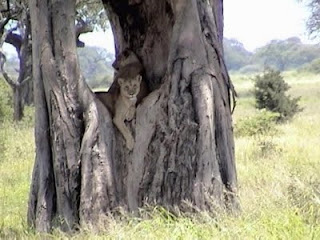 Then we spotted two lions also taking shade inside the hollow of a baobab tree. This was our first lion sighting and what a good one! While lions are usually not considered to climb trees like leopards, in Tanzania there are several areas where this is becoming more commonly seen. Manyara National Park, a small park to the west of Tarangire, has several prides that are seen in trees and we observed a lion pride in an acacia tree in the Serengeti. They climb trees to gain respite from tsetse flies that inhabit the grass and brush on the ground.

In addition to lions, we observed one leopard which was resting in the branches of an acacia tree. This is typical leopard behavior and they will take the body of their prey up the tree with them to protect it from other predators. Unlike lions who travel in prides of six to eight individuals or more, leopards are mostly solitary animals except during the mating season when pairs may be seen together. 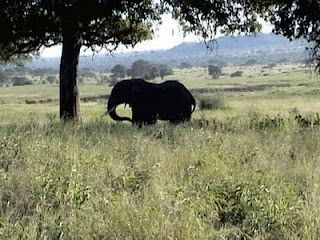 We came upon several herds of elephants one morning. There were about one hundred of them gathered on a savannah area and we observed as groups of females with calves took their turn to drink at a small pond. Groups of eight to twelve individuals would drink for a few minutes and then move off to allow another group to the pond. We also observed two young males that were charging at each other. Mothers and daughters form bonds that can last for a lifetime. Mature males do not typically travel with the females but are solitary. 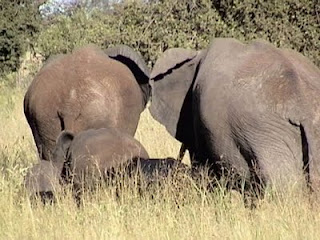 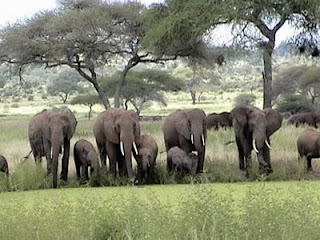 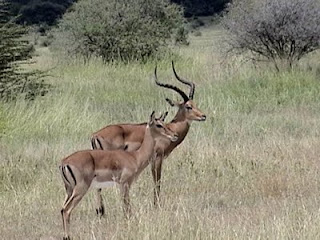 We stayed in Tarangire for two days, staying overnight at a wildlife lodge which was not fenced. On the lodge grounds, we observed a family of Kirk’s Dik Diks that had made the periphery of the grounds their territory. These miniature antelopes with large eyes are the smallest of the African antelopes. They appear to be no bigger than a medium sized dog. They mate for life and do not venture from their territory which they stake regularly with dung. 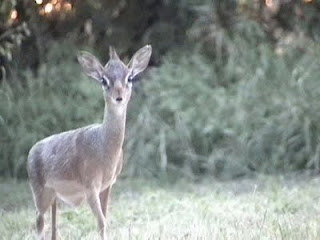 Savanna baboons and vervet monkeys were widely seen in the park and were common visitors to the wildlife lodge. Troops of vervets and baboons typically contained about fifteen individuals. Vervets are small monkeys with long tails and are usually seen in trees while baboons are much larger spending more of their time on the ground. 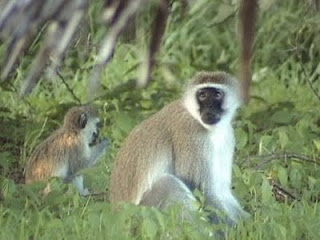 Both species are highly opportunistic in foraging for food and human lodging with food attracts them, hence their presence at the lodge. I watched one baboon troop as a dominant male became aggressive. He charged his opponent with a loud scream and the opponent fled. Aggressive behavior is used to enforce dominant status between males that compete to mate with the females. 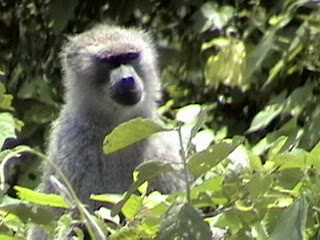 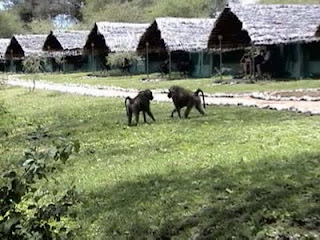 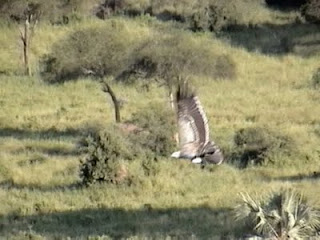 We were lucky to see a flock of lesser masked weaver birds who were building their nests in a tree at the lodge. The male weavers are very industrious nest builders. Nests are constructed from strands of long grass that are taken one at a time and brought by the male to the nesting site. The strands of grass are then intricately woven to form a basket-type nest that hangs from the tree. As the nests are nearing completion the females arrive to inspect the nests and the males compete loudly for their attention while hanging outside of the little basket nest. The one tree at the lodge had over twenty of these small nests under construction. The nests are used only once. 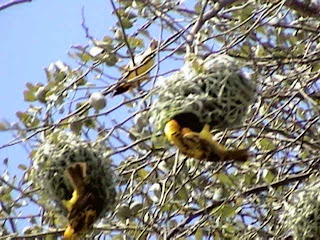 Posted by Kathy Stanley at 1:04 PM