Sedona: Legends in the Landscape

Photos from a recent trip back to my one of favorite places on the planet: Sedona, Arizona. Spectacular red rocks with a multitude of trails and hikes ranging from easy to difficult. There is just no other place like it. My previous posts Sedona Gift of the Canyons and Stars of Sedona express some of my experiences in this magical land. 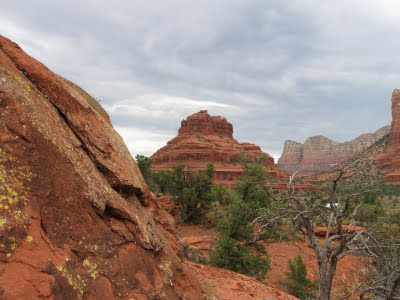 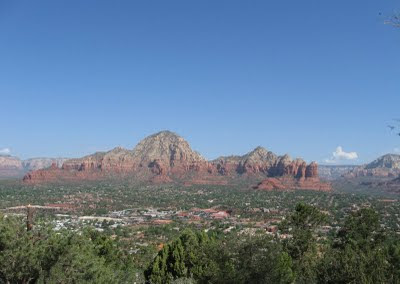 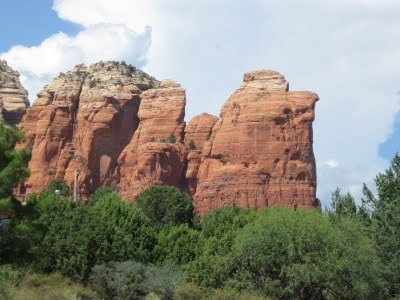 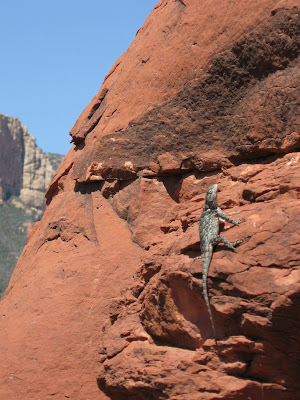 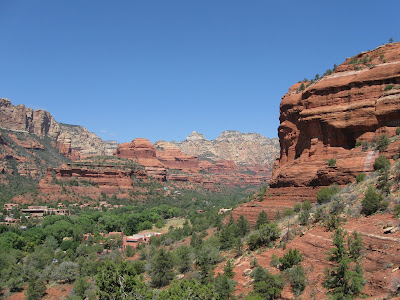 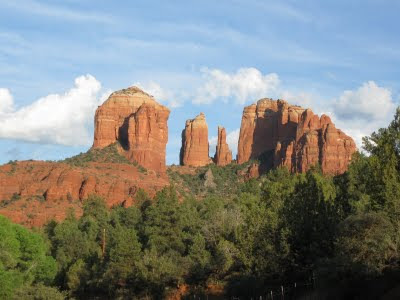 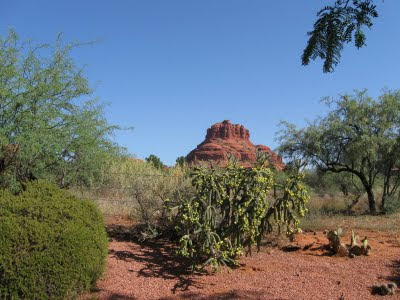 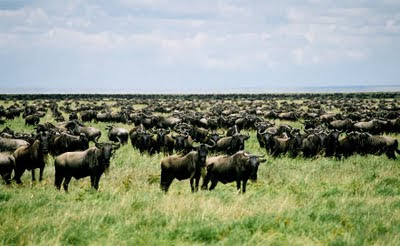 August 14, 2010 Update on Serengeti: See "Save Serengeti from death highway"
Driving onto the Serengeti Plains was like entering a vast ocean of grass. Serengeti National Park is an ecological region that contains 14,756 sq.km. The topography consists of flat grassland in the south interspersed with islands of rocks called kopjes that are favored respites for cheetahs and lions. The western section of the park consists of acacia woodland. The northern perimeter of the park lies on the border with Kenya and the ecosystem continues into the Masai Mara Game Reserve which is located in Kenya. The combined area of the two ecosystems is 25,000 sq.km. The predominant wildlife feature of the Serengeti is its great population of herbivores and the annual spectacle of the wildebeest migration. 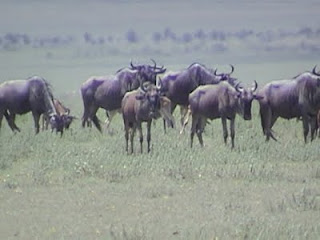 The term “migration” is used to refer to the whole population of herbivores as well as to their movement through the ecosystem as they follow the seasonal pattern of rainfall in search of food and water. Wildebeests in the park number approximately 1.5 million. Another 500,000 herbivores such as zebras and gazelles travel with the wildebeest herds. The migration follows a typical pattern: during the winter months of January to March, the migration is massed on the southern plains of the Serengeti where calving takes place in February. The rains start in this region in April and the herds begin to move up into the central areas of the park. By July and August, the migration moves into the north and into the Masai Mara in Kenya where they spend the dry season. They begin to move back down to the south when the rains return to the southern plains in October and November. The wildebeest herds were massed on the southern plains in this area as we drove through. 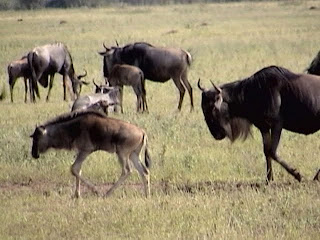 A literal sea of herbivores was massed on the short grass plains. Thousands of wildebeests, zebras, and gazelles were seen for miles. The calving season had just begun and in one area, I observed hundreds of wildebeests, each with a very young calf. Up to 5,000 thousand wildebeest calves are born each day in the calving season which typically begins in late January or early February and continues for about six weeks. Calves stand and walk within minutes of being born and are on the move with their mothers in order to limit the danger of being attacked by predators such as hyenas and lions. The flood of calves over a short few weeks ensures that while some may be taken by predators, many more will survive than if the births were staggered throughout the year. Zebras and gazelles also give birth to calves around the same time as the wildebeests. By the time April and the wet season arrives, the calves are strong enough to embark on the long migration with the herds. 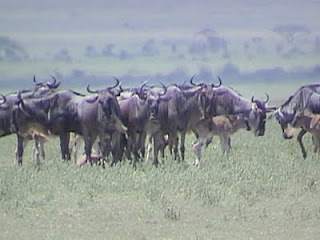 Driving through the plains, we caught our first sighting of a very pregnant cheetah in the tall grass and then stopped to see a beautiful big leopard sleeping in a tree. Our next three nights were spent at a mobile camp set up for us in the bush at a special camp site. I loved being immersed in the African bush. Our camp was wonderfully set up by our safari operators and we were well cared for with good food and camp fires at night. We were warned to zip up our tents tightly every night and to not come out and walk around as hyenas and lions can visit at their leisure. We heard a few hyenas nearby at night and some people heard a lion roaring in the distance one night. I woke one morning to hear a giraffe eating on the leaves of a tree right outside my tent. It was still dark and I couldn’t see it but it was unmistakable to me that it was a giraffe and our guides confirmed the camp had been visited by giraffes that night. 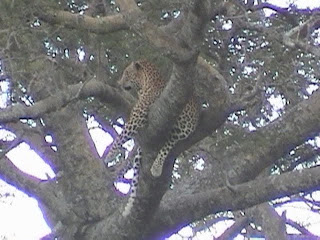 We were able to observe a total of about 50 lions during our four days in the Serengeti and the most interesting observation was the pride of eight that were sleeping in an acacia tree. We also observed several prides lying on and around the kopjes, where they gain an advantage by being able to survey the savannah from a high perch. In the Western Corridor of the Serengeti, where the terrain is denser woodland forest interspersed with pockets of tall grass, we came upon a pride of about twelve lions. They were sleeping by the side of the road but were highly camouflaged in the tall grass. 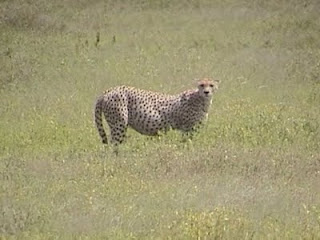 Lions are nocturnal animals, sleeping and resting during the day and hunting at night. The lions in the Serengeti are very used to the presence of the safari vehicles and will even approach the vehicle and lie beside it if it will provide shade in the heat of the day.
Other interesting species that were observed in the Serengeti included jackals, hyenas, hippopotamus, nile crocodiles and an abundance of other herbivores that included topis and defassa waterbucks. 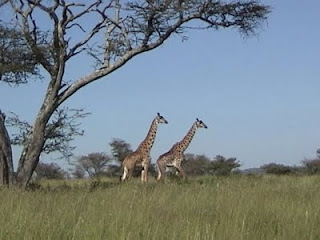 The Serengeti contains an astonishing 517 species of birds and some of the more interesting species that we observed here included the secretary bird, hammerkops and the African fish eagle. 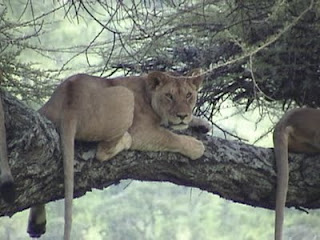 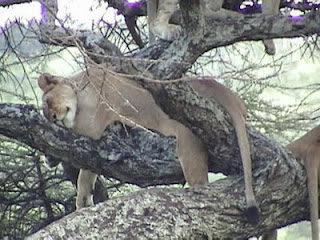 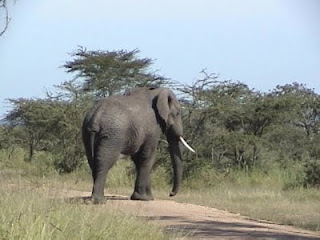 The Serengeti ecosystem is also subject to the effects of global warming. Recent years have brought drought to the region and the changing patterns of rainfall can affect the migrating herds and upset the balance in the ecosystem as a whole. 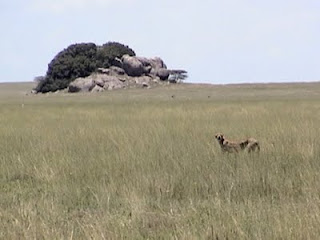 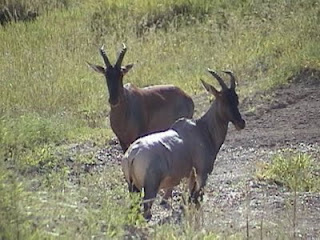 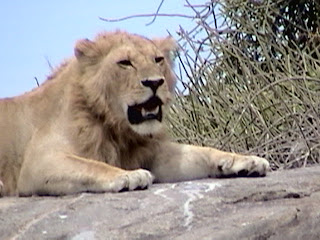 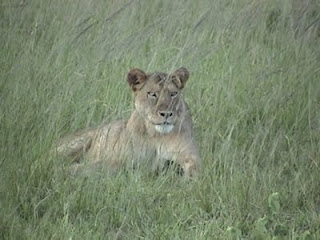 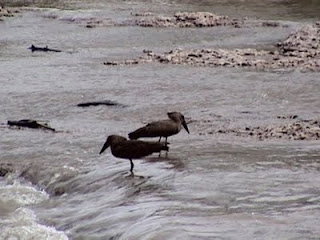 The Maasai are a tribe of pastoralists who are indigenous to Tanzania and now live in the areas around Tarangire National Park, the Ngorongoro Highlands, Olduvai Gorge and on the outskirts of the Serengeti National Park. Easily recognizable, they dress in bright red blankets and togas draped around them. The Maasai believe that God gave them all the cattle in the world and their herds of cattle are their most prized possession. Their diet consists mostly of cow’s milk and blood. Traditionally a nomadic people, the Maasai now have to live with restrictions imposed upon them by the boundaries of the national parks. Many of them have now been forced to live in permanent bomas (small communities) and there is concern whether their culture can survive as a result of this. 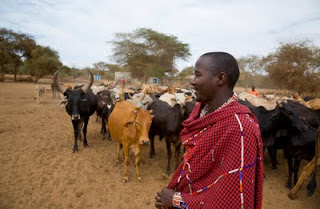 In their book The Myth of Wild Africa, Jonathan Adams and Thomas McShane highlight the negative effects of wildlife conservation in East Africa which has displaced traditional peoples from their way of life. They point out that the Maasai are not hunters (therefore not a threat to the wildlife) and that over the centuries of their living in the area around the Serengeti, the Maasai used a method of rotating lands for pasture that ensured that their cattle and wildlife could survive harmoniously. However, without understanding, when the governing administrators deemed the Serengeti and Ngorongoro as National Parks, the Maasai were forced to relocate to the outskirts of the parks, and this has caused more damage to the ecosystem due to over grazing by cattle causing desertification. On our travel through the region, we saw small groups of Maasai, usually herding cattle or selling their blankets and beaded jewelry to tourists by the road side. In Olduvai Gorge, we came upon three young Maasai boys herding goats in the canyons and a group of young adolescent males wearing white paint on their faces indicating they had reached puberty. There are several Maasai bomas that accept tourists as visitors however we did not visit these. Our Tanzanian guides told us that there is controversy about whether the Maasai should be on display for tourists and at the same time, they should be allowed to earn money in this way if they so desire. They are a people that co-existed with the wildlife long before the days of colonialism and conservation, and while these issues are very complex, I wonder whether displacing them was wise for the ecosystem as a whole.

The Serengeti and the other national parks of northern Tanzania are amazing wildlife sanctuaries most worthy of being UNESCO designated World Heritage Sites. Their preservation and study by conservation biologists is vitally important particularly with the increasing threats to the planet unfolding with global warming.Copyright©Kathy Stanley 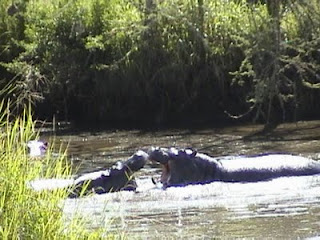