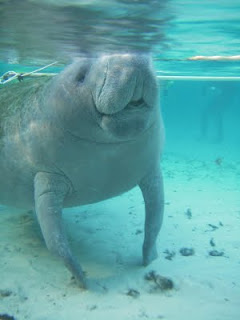 So they rescued Ilya, the wayward manatee, who had strayed too far and was in New Jersey. Thing I don't understand is why they have to send him to the Miami Seaquarium?????? Why not release him in the Crystal River in Florida or some other coastal area indigenous for manatees where he can be free. No, they decide to jail him instead, probably because he's been traveling up the coast for years. Thing is, he probably didn't realize it was time to head home because of the rise in ocean temperatures. And that's not his fault. It's ours. Go figure.
From an AP story today on The Huffington Post:

MIAMI — Ilya the wayward manatee has arrived at his new home in Florida after being rescued from murky waters near a New Jersey oil refinery. Ilya left Atlantic City International Airport on a transport jet Thursday. Miami Seaquarium was his ultimate destination. Ilya was pulled from a creek at the ConocoPhillips oil refinery in Linden and had been recuperating at the Marine Mammal Stranding Center. Federal wildlife authorities kept the rescue a secret, fearing a crush of media and well-wishers could stress the manatee. Ilya needed to be rescued because New Jersey's waters are too cold for him to survive for long. He's been migrating as far north as Massachusetts for the past decade, but dithered too long in the Garden State this year.
See full story.

Posted by Kathy Stanley at 1:03 PM