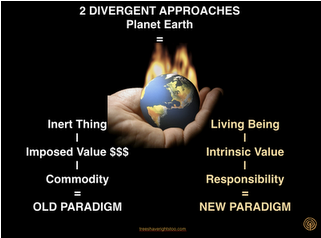 I have always been interested in the Deep Ecology philosophy inspired by Arne Naess and embraced by activists such as Joanna Macy and John Seed, both of whom came up with the Council of All Beings workshops years ago. From the book Thinking Like a Mountain by John Seed, Joanna Macy, Pat Fleming and Arne Naess: "Deep Ecology questions the fundamental premises and values of contemporary civilization...within the framework of deep ecology, and contrary to key assumptions of Judaeo-Christian/Marxist/humanist tradition, humans are not to be viewed as the ultimate measure of value or as the crown of creation. We are but 'a plain member' of the biotic community and our arrogance with respect to this community threatens not only ourselves but all of life...we must come to understand that life forms do not constitute a pyramid with our species at the apex, but rather a circle where everything is connected to everything else...The themes of deep ecology echo the ancient earth wisdom of native peoples."

So I was particularly interested when I came across this article today on the Treehugger.com website about Polly Higgins, a U.K. lawyer who has spearheaded a proposal to the United Nations that they/we adopt a Universal Declaration of Planetary Rights. The Declaration is clearly based on Deep Ecology principles and I am glad to see this being represented at the U.N. Climate Change Meeting:
From the Treehugger article titled "Never Mind a Climate Treaty, is it time to consider a Universal Declaration of Planetary Rights?"

Let's step outside what's being negotiated here at COP15 for one second and consider the notion that even if we get a fair, ambitious and binding climate agreement at the end of next week it really misses the point -- the point that we are not focusing on the sources of pollution, we are still commodifying forests, instead of legally recognizing that their is intrinsic value in nature. Is it time for a universal declaration of planetary rights? Polly Higgins, an environmental lawyer from Scotland, certainly thinks so:

She describes this approach as an entirely different paradigm than what's being discussed right now. A switch from viewing the planet as an inert thing -- which can be traded, damaged and which has no legal voice in itself -- to one that is a living entity. If you make that shift you have a responsibility to protect it. 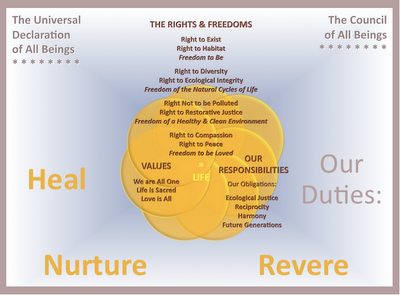 The first step in this process, Higgins told me, is to start remapping where emissions are coming from. Rather than talking in terms of nations or even individuals, we need to talk about communities. Doing so you realize that corporations are a type of community and that 300 of them in the heavy extractive industries are responsible for the overwhelming majority of greenhouse gas emissions.

Turn Off the Carbon Emissions Tap at the Source
Higgins says, "You and I, as human beings, do not emit massive amounts of carbon emissions. It's actually looking at what is that we're doing that creates high levels of carbon emissions: Extraction of natural resources. If you turn the tap off at point of source you stop all those emissions being used."

She uses the example of hearing a neighbor abusing a child through your wall. "You'd go around to your neighbor and say 'Hey, that's got to stop.' You wouldn't say, 'Do you mind doing that a little bit less?'"

When the police arrive they are justified in taking action because that child has rights. It may not be able to represent itself in court, but it has rights that the community will (hopefully) defend.

That obviously doesn't hold true for a patch of forest in the Amazon. Communities may sue for reparations based on violation of their human rights -- something not always easy to prove -- but the forest itself has no voice.

But how do we get to a place were the planet itself has intrinsic legal value?
Higgins gives the example of the banning of slavery by the British 200 years ago -- one which Dr James Hansen has used of late as well, if in the context of greenhouse gases. It would be absurd to say to slave owners that you can still own slaves but just use them a little less -- once you recognize that these slaves are human beings with legal rights. You obviously have to ban slavery. 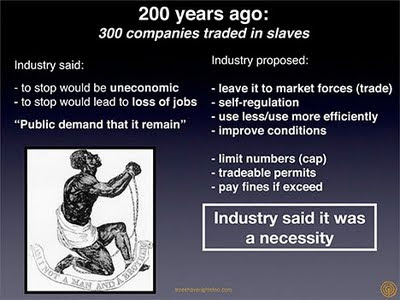 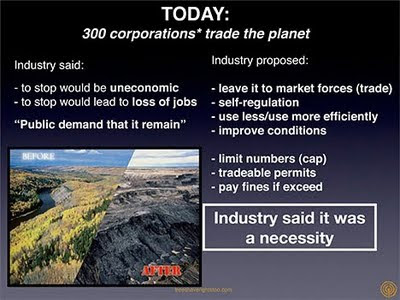 Still, there's a big leap between that (now) tidy example and granting the planet rights of its own. Even if you can get enough people on board with the idea, there's the issue of enforcement -- international law not always being the easiest thing to enforce in a world where, despite best intentions, might still makes right if you're an important enough nation.

OK. This short summary doesn't entirely do the notion of universal planetary rights justice -- check out Higgins' website: TreesHaveRightsToo -- but in among all the negotiations, the protests, and the raised voices it's worth considering the type of shift in consciousness, the shift in relation to the natural world, that ultimately needs to happen for 7+ billion people to live on this planet.~Matthew McDermott on Treehugger.com

Posted by Kathy Stanley at 9:31 AM