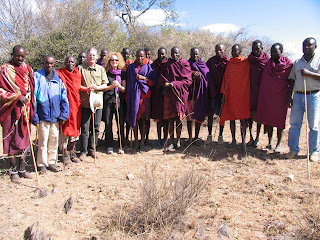 Photo: Thomson Safaris co-directors and co-founders, Judi Wineland and Rick Thomson, meeting with numerous Maasai elders and leaders of Sukenya. The leaders and elders of Sukenya have worked regularly with Thomson Safaris from the moment the Enashiva project began and have been instrumental at all levels for conservation and community efforts

On December 19, 2009, in a blog post titled "Maasai being pushed out?" I posted a copy of an article published in an online magazine, The New Internationalist, which included some serious allegations against Thomson Safaris in Tanzania. As I have had first hand experience with this company, and was impressed with them and their support of Tanzanian schools as well as other community empowerment projects, I contacted them myself to get a response to the article. Thomson has given me permission to reprint here their letter to the Editor of The New Internationalist and I believe that the letter speaks for itself. Pictures in this post all courtesy of Thomson Safaris:


Editor of the New Internationalist: In your December issue, you ran a story, “Hunted Down,” by Rosie Martin of African Initiatives that included considerable misinformation and fabrications about our company. Thomson Safaris has a nearly 30-year tradition of providing quality safari experiences in Tanzania while fostering sustainable development and supporting local communities. These values are at the heart of the company’s ongoing efforts at the Enashiva Nature Refuge in northern Tanzania, where Thomson has been working with Maasai communities toward the goal of creating a model for community empowerment, wildlife conservation, and habitat restoration. We have the overwhelming support of Maasai communities in Sukenya and other communities near the farm. In particular, the people of Sukenya, a village that directly borders Enashiva, feel as if their voice has gone completely unheard in media reports about Thomson. Enashiva was formerly known as the Sukenya Farm, and today the people of Sukenya and many other communities have partnered directly with us to work on community and conservation issues. We are aware that a small group of people has been spreading a significant amount of misinformation and untruths about our company and our efforts to develop a community-based conservation and ecotourism project. This group has also been successful at attracting media attention, misleading a number of people, and dominating the dialogue about some of these issues. In fact, the only two sources quoted in the article are from this same organization, which happens to be supported and funded by African Initiatives. This seems to show the article’s inherent one-sided bias in terms of comments made about our company. In fact, the author never attempted to even contact us, as is standard practice in fair and balanced journalism. We commend the African Initiatives stated goals of strengthening communities and social justice. We believe, however, that they are being misled by fabrications with absolutely no supporting evidence whatsoever. For one, the borders of Enashiva have never changed, and Thomson Safaris and its employees at Enashiva do not condone and have never instigated acts of violence. Quite the contrary to what’s written, Thomson has always provided pastoralists with access to water at Enashiva when water cannot be found elsewhere. There is only one year-round small spring located on the border of Enashiva, which pastoralists always use freely. We are engaged in ongoing discussions with community leaders about future sustainable grazing, and we remain committed to ensuring that pastoralists can benefit from the natural resources around them and pursue their livelihoods. We urge you to speak with the Enyuata Women’s Collaborative, the Sukenya Primary School, the Laitaiyok council of traditional Maasai leaders and elders, and the countless other Maasai groups, families, and individuals who collaborate with us on community projects and initiatives all the time. Their voices should not go unheard. In the end, we stand behind our record and the facts, and we have been open and cooperative with all investigations concerning false allegations about our company. By the way, none of the investigations, some led by human rights organizations, have found allegations against our company to be true. We will be happy to connect you to any of the above-mentioned contacts and provide supporting materials. Regards, Thomson Safaris


I believe that it reflects poorly on the editors of The New Internationalist and their journalistic standards that they would publish an article that included inflammatory remarks about a company, without so much as attempting to get a response prior to publication. 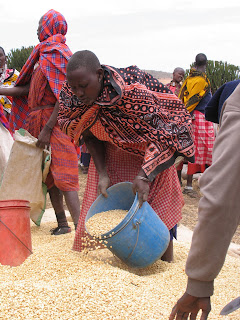 Photo: Thomson Safaris and FoTZC collaborated with the government to deliver 50 tons of food aid to the communities around Enashiva this past summer during the drought.

Thomson Safaris has won the 2009 Tanzania Conservation Award for their efforts at the Enashiva Nature Reserve, this being just the latest in a series of awards for the company. From Adventure Travel News May 25, 2009:

Arusha, Tanzania — The Tanzania Tourist Board has honored Thomson Safaris (www.thomsonsafaris.com) with the 2009 Tanzania Conservation Award.

The award specifically recognizes the company’s efforts in establishing and supporting the Enashiva Nature Refuge, a community-based conservation project east of the Serengeti.

On May 19, Enashiva’s project manager, Daniel Yamat, received the award on behalf of Thomson Safaris at a ceremony in Cairo, Egypt, which was attended by Tanzania’s minister of tourism, Shamsa Mwangunga, among other distinguished guests.

“Thomson Safaris is humbled to receive this honor,” said Yamat. “We owe our deepest gratitude to the Tanzania Tourist Board, the government, and, most of all, the Maasai communities around Enashiva that have helped make conservation successful. The award really belongs to them.”

Since conservation efforts began at Enashiva, wildlife populations have more the doubled in the area and sightings of endangered species such as wild dog have increased dramatically. Rare woodland habitats that support endangered tree species are also being restored.

Yamat, who is of Maasai heritage, collaborates with a liaison committee of Maasai elders and leaders who assist in guiding Enashiva’s principles and work with local communities on conservation efforts and community projects. In 2008, select projects included the development of a borehole and water well, support for a women’s entrepreneur group, and the donation of a maize-grinding machine. Yamat noted several projects that are in the planning stages for 2009.

“As tourists come to Enashiva, we hope more opportunities will open up,” said Yamat. “Wildlife and communities do not have to be in conflict with each other. They can both win.”

The Conservation Award marks the third honor Thomson Safaris has received from the Tanzania Tourist Board. In 2005, Thomson received the Humanitarian of the Year Award, and they were named Tour Operator of the Year in 2001. More recent recognitions include being named among the Best Adventure Travel Companies on Earth by National Geographic Adventure in 2008 and 2009. Thomson Safaris was also a finalist for the 2008 Condé Nast World Savers Award, which recognized the company’s efforts in supporting education initiatives in Tanzania.

Thomson works closely with Friends of Tanzanian Schools (www.fotzs.org), a non-profit organization that has funded education projects at more than 12 schools that educate approximately 11,000 children annually. Earlier in 2009, FOTZS funded and facilitated the construction of teachers’ housing at Robanda Primary School, which has also received more than 3,000 donated textbooks from the organization. More than 40% of Thomson Safaris travelers visit schools in Tanzania and provide most of FOTZS’ funding through donations. 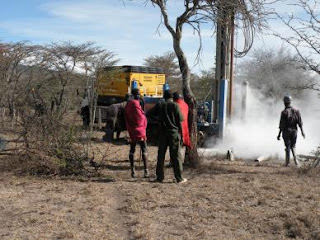 Photo: Thomson Safaris developed and dug a borehole for drinking water in Sukenya. FoTZC will be exploring more clean water projects in 2010. 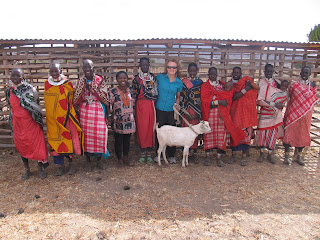 Photo: Thomson Safaris co-director, Judi Wineland, and a board member of Focus on Tanzanian Communities (FoTZC) with the leaders of the Enyuata Women's Collaborative. Thomson Safaris and our guests have been supporting the women's group for more than two years. Now FoTZC has officially started to support the group to establish a small business this year. 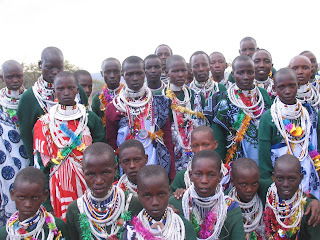 Photo: Thomson Safaris was invited to the Standard Seven graduation at the Sukenya Primary School. Here are some of the graduates. The company has provided support to the school in the past and now FoTZC will be working with Thomson to build teachers' housing at the school and provide more materials in 2010.

Posted by Kathy Stanley at 3:18 PM