I am all for raising awareness about the dangerous rise of CO 2 in the atmosphere, however, I was shocked and outraged by a story on EcoHearth today about a commercial which has been scaring children in the U.K. The commercial shows a father reading a bedtime story to his daughter, however the story reads more like a nightmare about rising sea levels and the loss of cities, etc. The ad is put on by a U.K. government department with the goal of educating people about the need to reduce carbon emissions.

This ad is unconscionable scare mongering in my opinion and it is reaching and scaring the least prepared people to deal with this: children. If we want to teach children about the environment (as we should), there are appropriate and much more effective ways of doing it than scaring them to death. Perhaps this ad is targeted to adults, however, just the scene of a nightmarish “bedtime” story being told to a child is despicable and the Government of the United Kingdom, who is really behind this television ad, should be ashamed of itself. The UK Government has been forced to defend itself for the ad, however they seem to miss the point of the outrage. They think people don't like the ad because they don't believe in the science of climate change. I am sure that is not the case with educated viewers. The point is that this ad is just plain wrong in its method and style of delivery. Why did they have to target a child in this ad? Whoever thinks that this is the right way to get across the message about climate change and lowering our carbon footprint, needs to go back to school to receive some serious environmental education training.

How do we educate children appropriately about the environment? One place to start is following the wise advice of notable environmental educator and writer, David Sobel. Sobel’s small book Beyond Ecophobia: Reclaiming the Heart in Nature Education (Nature Literacy Series, Vol. 1) (Nature Literacy)

is a masterpiece of wisdom for any teachers, parents and communities interested in environmental education. Sobel notes that it is fine to educate adults with messages of the environment that show the destruction of rainforests and other disturbing images, as adults are developmentally prepared to receive and process this type information with necessary critical thinking skills. Children, on the other hand, are not prepared for this, and neither should they be expected to be ready to handle the saving of the planet at such young ages! Sobel says:

“Lurking underneath ‘environmentally correct’ curricula is the assumption that if children see the horrible things that are happening, that they too will be motivated to make a difference. But those images can have an insidious, nightmarish effect on young children whose sense of time, place, and self are still forming. Newspaper pictures of homes destroyed by California wildfires are disturbing to my seven-year-old New Hampshire daughter because she immediately personalizes them. “Is that fire near here? Will our house burn down? What if we have a forest fire?” she queries because for her, California is right around a psychic corner. What’s important is that children have an opportunity to bond with the natural world, to learn to love it and feel comfortable in it, before being asked to heal its wounds. . . Our problem is that we are trying to invoke knowledge, and responsibility, before we have allowed a loving relationship to flourish.” 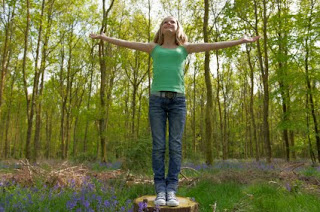 Sobel has studied children’s relationship with the environment and recommends that there should be three stages of environmental education that follow the stages of development in children:

“At each of these stages, children desire immersion, solitude, and interaction in a close, knowable world. We take children away from these strength-giving landscapes when we ask them to deal with distant ecosystems and environmental problems. Rather, we should be attempting to engage children more deeply in knowing the flora, fauna, and character of their own local places. The woods behind the school and the neighborhood streets and stores are the places to start.”
Empathy between the child and the natural world should be main objective for children ages four through seven. As children begin their forays out into the natural world, we can encourage feelings for the creatures living there. Early childhood is characterized by a differentiation between the self and the other. Children feel implicitly drawn to baby animals; a child feels pain when someone else scrapes her knee. . . . Cultivating relationships with animals, both real and imagined, is one of the best ways to foster empathy during early childhood. Children want to run like deer, to slither along the ground like snakes, to be clever as a fox and quick like a bunny. There’s no need for endangered species here – there are more than enough common, everyday species to fill the lives of children. 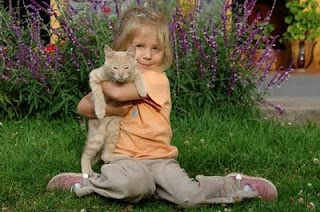 Sobel goes on to indicate that “social action appropriately begins around age twelve and certainly extends beyond age fifteen. While woods, parks, and playgrounds are the landscapes of middle childhood, adolescents want to be downtown. As children start to discover the “self” of adolescence and feel their connectedness to society, they naturally incline toward wanting to save the world.”

It is my hope that there will be enough of an outcry to stop these horrible ads from showing on U.K. television stations. Even if they are targeting adults, some unknowing adults may think that it is appropriate to scare their children with these bedtime stories about environmental destruction. Don’t kids have enough burdens placed on them these days? Let kids be kids. Let them play in the garden, and the parks, let them develop relationships with beloved pets. Let them hear soothing, peaceful bedtime stories. Take them to the forest and let them play in the stream. Those early childhood days of play and discovery can never be given back to them. 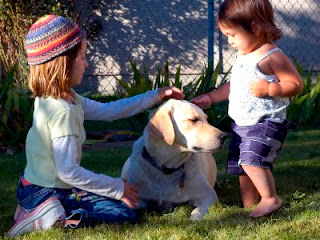 If we want children to flourish, to become truly empowered, then let us allow them to love the earth before we ask them to save it. Perhaps this is what Thoreau had in mind when he said, “the more slowly trees grow at first, the sounder they are at the core, and I think the same is true of human beings.” ~ David Sobel