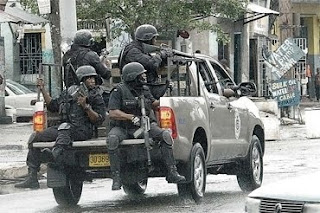 Who didn’t know that Jamaican politicians were playing with fire with their garrison politics for the past 40+ years? Now that fire has exploded and it seems like Kingston is descending into a near anarchy in places. From the Observer:
A dumb-founded Jamaican nation remained transfixed to radio and television sets yesterday as marauding gunmen openly challenged security forces for control of the streets of downtown Kingston.

The news is conflicting this morning. The Observer saying Kingston is ‘calmer’, yet over on Twitter, I’m still hearing about gunfire and more areas being blocked. 2 policemen killed and 6 injured in a shootout last night on Mountain View. 4 police stations set on fire yesterday, police cars stolen, shots being heard from Red Hills Road to Mountain View Ave. The gangs have united in a front against the police. The pictures are unbelievable. I sat up late last night glued to Twitter which is the most up to date source. I watched Bruce Golding’s tepid little short address to the nation last night and wondered “Is this man for real? How long does he think he can hang on to his job?” He has made a mess out of things. I agree with those Jamaicans who think that he should resign and the GG should appoint an interim/unity government with the best people of both parties. 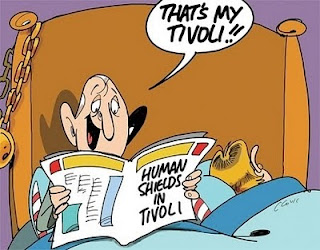 The problems go way back. If you arm ghettos with guns for decades, using them to be the deliverers of votes in your pursuit of political power, then you will have generations growing up knowing nothing other than the gun. You will have what is happening in Jamaica today. This cartoon today in the Observer shows a sad reality of who is partly responsible for this. Sadly, this news overshadows some positive news of peace being made between some formerly rival communities.

Posted by Kathy Stanley at 6:38 AM