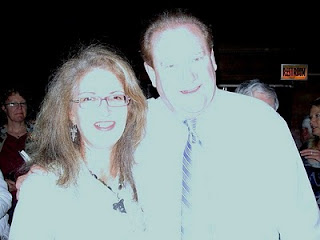 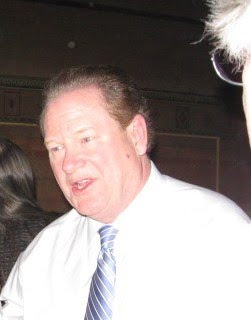 I had the honor of meeting Ed Schultz, spirited progressive radio host and host of MSNBC's The Ed Show tonight in Portland. Schultz was in town to promote his new book Killer Politics: How Big Money and Bad Politics are Destroying the Great Middle Class.
Ed began the evening by thanking Portland and in particular the great progressive radio station 620KPOJ AM for being a juggernaut of support for progressive talk in this country. His MSNBC team was there filming the event and some of it may be shown on his TV show tomorrow. The event will also be broadcast in its entirety on his radio show tomorrow.

Ed said that his wife Wendy told him when they first came here in 2004 that “Portland was the 1st place you came where people really like you.” Since then he said that his team has been a vehicle for the voices of America. The progressive talk movement has grown in this country although it still lags behind the Republicans talking heads. Ed’s radio show has soared in popularity in the past 6 years and now he has his own TV show on MSNBC which has grown 28% in popularity over the past year – more than any other news show on the air.

Ed said we were at a defining moment in this country. In the healthcare debate, we found out who the real Democrats are. He encouraged people to treat each election like it’s on the national stage so that we can get more good progressive Democrats in power. He was disappointed that Bill Halter lost the Senate primary in Arkansas to Blanche Lincoln who he characterized as a corporate Democrat. He warned the Democrats in Washington that you can’t get what you want in this country without organized labor and urged everyone to keep fighting.

The night was all about the politics of the moment, the Tuesday night primaries, and the progressive fight for things like health care for all, the Employee Free Choice Act, funding proper education in this country, not allowing jobs to be sent overseas and reigning in the Wall Street barons. The lively and engaged Portland crowd cheered when he called on Obama to end the wars and bring the troops home.  He said that we are following in the footsteps of the Russians in Afghanistan and we now seem to be more entrenched than ever before.

Ed acknowledged that we have two good Democratic Senators here in Oregon however he also said that part of being a good progressive is that we have to have the intestinal fortitude to hold our people accountable.  When someone asked what we could do here in Portland to support the fight for Progressive leadership across the country, Ed said that we could support candidates in other states - even give $5 to support a Progressive who is trying to beat a corporate Democrat or a Republican.

Ed lamented the fact that the media in this country is not covering the issues of the middle class and the vast difference in wealth between the top 2% of this country and the rest.   He lambasted Fox News and the damage they are doing to the country by misleading the public and not telling the truth - "You can't have your own set of facts," he said.   He noted that the biggest voting block in this country has the weakest voice.  He spoke disparagingly of people like Meg Whitman who just basically spent $80 million to buy herself into the Governor's race in California, and Michael Bloomberg who spent $150 million in New York City to keep his position as Mayor.  Ed asked the question, "Who in the middle class in this country has the money to get into politics?"


Update to this post June 11:
I'm sitting here listening to the radio broadcast of this Portland Town Hall meeting with Ed Schultz and I want to say how proud I am of Portland. I've lived here for 5 years and at times it's been a little rocky - not many Jamaicans or West Indians living out here - it's not like living in our Caribbean-rich communities of Toronto or South Florida.  For me at times it's been a little like being out in the wilderness.  Plus leaving Canada for the U.S. one realizes how vastly different the cultures of these countries are.  However, last night, I felt so totally connected to this incredible community of progressives in this city who are informed, engaged, intellectually honest and on the side of social justice for all.  These are people who have heart, have deep compassion for the needy and the underprivileged and who are committed to doing their part to making the world a better place for every human being.  Last night at the Baghdad Theater I was surrounded by these people and it was pure joy.  Listening to 620KPOJ AM has been a big part of my life here and I'm proud to support this great radio station for bringing much needed progressive voices to the airwaves of America.  We need more of that!  So thank you Portland, for being progressive, for being feisty and passionate, for demanding change, for standing up for the working class, for fighting for justice.  Viva Portland!
Read an exerpt of Ed Schultz's book Killer Politics here.