G20 Toronto: What the Leaders Will Not See 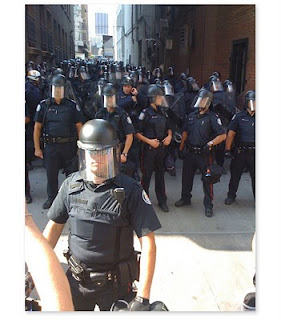 Photo Jeff Robson in The Torontoist

Toronto was my adopted home for 20 years and I am astonished at the pictures and reporting coming out about what this farce of a G20 Summit is doing to the city. Whole blocks have been locked down - a host of institutions like the Art Gallery of Ontario are closed to the public. A "fake lake" has been built just for the benefit of the leaders.  And the cost of security alone is $1 billion! What??!! Yes, $1 billion.  And for what purpose?  It is unconscionable that so much money is wasted at a time when social services are being cut. As a friend of mine summed it up quite succinctly:  ""It's a billion dollar bullshit festival taking place when they are brutally cutting services to a multitude of deserving groups that don't fit in with the conservative party's interests. Baaaaah!"

The Toronto Star posted this video of the faces that the G20 leaders will not see:


Reporting on the staggering affects this is having on the city and its residents from Sandro Contenta at GlobalPost:

A sign of the hassles ahead is the security fence that snakes for more than two miles around several downtown city blocks, where the G20 leaders will meet June 26-27. (A day earlier, the more exclusive G8 meets about 140 miles north in a lakeside resort in the cottage-country town of Huntsville, Ontario.)
An estimated 30,000 Torontonians will have to go through security hoops to come in and out of their condos or workplaces inside the fenced-in area. Many business owners have decided it’s easier to just keep their shops closed that weekend. Those immediately outside the 10-foot-high fence are likely to do the same, fearful of the sometimes violent protesters attracted by international summits.
Major theaters and art galleries have also announced they’ll be shutting their doors, and the Toronto Blue Jays, who play in the downtown Rogers Center, have moved their scheduled home series against the Philadelphia Phillies to Philadelphia.
In short, the core of Canada’s biggest city may end up looking like a commercial ghost town. It would make an ironic setting to a summit discussing how to avoid another economic collapse.
And then there is the price tag: Protecting political leaders at both the G8 and G20 summits will cost an astounding $1 billion — a sum that has hit Canadian taxpayers, who are footing the bill, like a vuvuzela blast.
To put this eye-popping amount in some context, security for the Pittsburg G20 summit in September 2009 cost $18 million; security for the London G20 in April that year cost $30 million. Security for the Vancouver Winter Olympics earlier this year — which lasted 14 days — was $900 million.
Here’s some more context: $1 billion is the entire yearly budget for the Toronto police force, plus overtime. $1 billion is what it costs Canada to support its military mission in Afghanistan each year.
Aid groups point to the shocking contrast between the security bill and the Canadian government’s four-year freeze on the level of foreign development aid. Others note that the G8 is $20 billion behind on an aid commitment to Africa made five years ago. 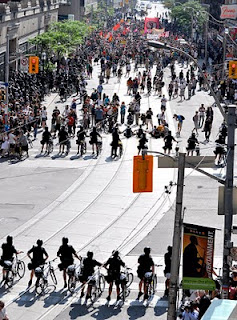 Is it any wonder then that people are protesting today. From an essay in the Globe and Mail:


Why I will protest at the G20

I am a Torontonian. I live in this city that is to be host to the G20 this weekend. And I am planning to protest. I will bring my face paint, banners and signs down to Queen’s Park. I will put my body on the line to march against this inequitable system where 20 nations make decisions affecting the whole world.
Yet this time, instead of being supported in my right to protest, I find myself explaining why I am legitimate, why I am not engaged in a terrorist act, and how many of our treasured Canadian social programs and rights that we take for granted resulted from people fighting for a better world.
A billion dollars has been spent to supposedly stop people like me. Media coverage has mostly focused on disruption to businesses and traffic. Police have been harassing my friends already while they have been passing out flyers, riding bikes or just lying down in the park.
My head can’t help but feel despair of ever reaching that world where decisions are truly democratic, where eradicating poverty is more important than furthering profit, and human rights matter more than the rights of capital. And yet my heart reminds me that magic is still possible. Even surrounded by fear and fences, hope and passion for an equitable and democratic world can yet be set free.
Annahid Dashtgard lives in Toronto. Read full essay here.

Posted by Kathy Stanley at 5:12 PM