Gulf War Syndrome and can BP shut this well down or is there catastrophic geological failure, unstoppable even by relief wells? 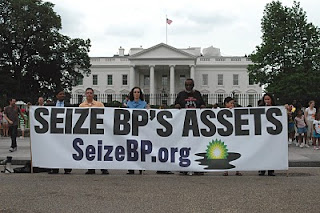 Eugene Robinson of the Washington Post writes today on the war we're fighting (and losing) in the Gulf oil spill:

It's great that President Obama and his advisers finally seem to understand the atmospherics of responding to the Gulf of Mexico oil spill. Now if they'd only get the policy right. . . The issue isn't what Obama is feeling, it's what he's doing. Why haven't skimmers been brought in from around the world to scoop up more of the oil? Why isn't the defense of the coastline being run like a military campaign, with failure not an option? Why is the answer to every question essentially the same -- "We've repeatedly asked BP to get that done" -- when we're dealing with a crisis that has to be seen as an urgent matter of national security and the public welfare?
Enough of asking BP. The company is responsible for the spill and must be made to pay dearly. But BP management answers to the company's shareholders, not to the American people. And even if BP's gaffe-prone chief executive, Tony Hayward, and his lieutenants had only the purest and noblest of intentions, the problem they have created in the gulf is far beyond their capacity to solve.
This is, essentially, a war that is partly being fought one mile beneath the surface of the gulf, where crude oil continues to gush out of the highly pressurized "Macondo" deposit -- which carries the name of the fictional town in Nobel laureate Gabriel Garcia Marquez's magical-realist masterpiece, "One Hundred Years of Solitude" -- at a calamitous rate.
The administration had no choice but to leave the initial response on the seafloor to BP. The government simply doesn't have the equipment or the expertise to stanch the flow. This unfortunate situation may reflect bad policy choices in the past, but that's the reality. One smart decision was to order BP to begin drilling a second relief well, in case the first one misses its target -- but neither will be completed until August, and there's nothing anyone can do about it.
A second battle is the effort to contain the tens of millions of gallons of oil that have already polluted the gulf and its coastline. Here, too, the administration has gone by the book and pressured BP to honor its responsibilities. It should be clear by now that this has been a mistake.
The Post reported Monday that the administration has received offers of assistance from 17 nations. Sweden has volunteered to send three ships that can each collect about 15,000 gallons of oil an hour. Norway has offered to send nearly a third of its oil-spill response equipment. Japan has offered to send some boom, which authorities on the scene complain is in short supply.
The Swedes, the Norwegians, the Japanese and most of the other would-be Samaritans are still waiting to hear from the U.S. government or BP. Last week, according to The Post, the administration did ask the European Union to help with any specialized equipment it might have. But meanwhile, oil has penetrated the marshes of southern Louisiana and is lapping onto the beaches of Alabama and Florida. The main spill is spreading, and hurricane season is upon us.
Every available piece of equipment in the world that can vacuum, skim, scoop or sop up oil ought to be in the gulf by now, deployed under a central -- probably military -- command structure. The beaches should be defended as if from a threatened enemy invasion. This is a time for overkill, for the Powell Doctrine, for "decisive force."
There's no silver bullet that can defeat this bloblike enemy, but each drop of oil that gets removed from the gulf and its shores is a victory -- and each drop that doesn't is a defeat. It's that simple. This is war. ~ Eugene Robinson
The mismanagement of this clean up effort has been staggering. Read the New York Times today on the chaotic efforts to manage the spill.

I wonder if Obama will mention anything tonight about the very scary reports coming out about damage beneath the  level of the sea floor.  What bothers me are the comments that he says like "we are doing all we can."  Clearly this clean up has been botched from the beginning. No, I don't think the U.S. Govt. has been doing all it can.   Or the comment he made this morning that  "the seafood from the Gulf is safe." Mr. President, how do we know that the seafood from the Gulf is safe?  With the millions of gallons of toxic chemicals (banned in other countries) being dispersed, not to mention the millions of gallons of oil spilled, why on earth would I blindly believe you that seafood is safe to eat from the Gulf?   Am I the only one who has these questions?


Mike Papantonio was on the Ed Show on MSNBC yesterday speaking out about the issue of the damage beneath the level of the sea floor and how this could mean that even relief wells may not work to stop this hemorraging.  And in a discussion piece on the Washingtonpost, John Hofmeister, former president of Shell Oil, responded to this question:

What are the chances that the well casing below the sea floor has been compromised, and that gas and oil are coming up the outside of the well casing, eroding the surrounding soft rock. Could this lead to a catastrophic geological failure, unstoppable even by the relief wells?
John Hofmeister: This is what some people fear has occurred. It is also why the "top kill" process was halted. If the casing is compromised the well is that much more difficult to shut down, including the risk that the relief wells may not be enough. If the relief wells do not result in stopping the flow, the next and drastic step is to implode the well on top of itself, which carries other risks as well.
We really need to find out what went wrong from the beginning so that we don't have this happen again.
Read more about this here and here.

Like everyone, I will be watching the President speak from the Oval Office tonight.  I support Seize BP's position outlined here in their latest message:

A message from Seize BP about
the Obama administration's new position on BP
The Obama administration has just announced a major shift in its handling of BP and the disaster in the Gulf of Mexico.
For six weeks the Obama administration just said NO to the growing nationwide chorus of public opinion demanding that the government seize BP’s assets in an amount commensurate with the damage caused by their criminal negligence, and that the funds be placed into a trust that could quickly and easily pay for damages and compensation now and into the future as more damages accrue.
Directly on the heels of Seize BP's demonstrations taking place in more than 50 cities -- with more demonstrations occurring every day -- officials from the administration are now announcing a "new" approach to BP: President Obama has given BP an ultimatum to create an escrow fund administered by an independent body for the payment of claims and damages or the White House will invoke its legal authority to create such an escrow account from BP’s assets. He plans to address the country in a nationwide television address Tuesday night and meet with BP executives at the White House on Wednesday.
But what is the reality undergirding the Obama administration's announcement? It may appear that the administration is now close to the demand of seizure of assets for an escrow account unless BP commits to the establishment of such an escrow account on its own accord. There are several key factors:
Seize BP’s position on the Obama administration’s New Approach Toward BP’s Assets
While it is clear that the Obama administration has undertaken what appears to be a dramatic shift in its handling of one part of the crisis, there are two central issues that will indicate whether it is just another sham public relations offensive or something that will make a real difference for the suffering people and communities in the Gulf states: (1) The size or amount of the escrow fund taken from BP’s assets (the real costs are likely to be in the tens of billions of dollars) and (2) that the “real people” of the affected communities, and not corporate and banking representatives or Wall Street lawyers, be selected to be the trustees of the fund.
Seize BP, since it inaugurated the demand to create a trust from seized BP assets, has demanded “that a trust established with the funds seized from BP should be administered by the people from the harmed area. The trustees should include representatives of the fishers, shrimpers, crabbers, unions, small business people and workers in the tourism and recreation industry, local elected officials, clergy, and independent scientists and environmentalists."
Seize BP will continue to organize demonstrations, rallies, press conferences and banner drops, collect tens of thousands more petitions, and engage in the kind of mass grassroots organizing that can, as it already has, shift the political climate in a way no politician can fail to ignore.
Spread the word. Tell your friends to sign up at SeizeBP.org.

Posted by Kathy Stanley at 8:25 AM