I am increasingly impressed with Twitter and its potential to equalize status between low-power and high-power groups, as well as its more obvious benefits of providing up to the minute news on breaking developments. A month ago, when Jamaica was experiencing the worst violence in its history in a clash between gangs and the government I found a lot of good information on Twitter. Three days into the conflict, the Jamaican government reported that they were upset that people on Twitter and Facebook had been “spreading misinformation” and that they (the government) were now going to establish their own media center to update the public on the developments. I immediately wrote how proud I was that the Twitter and Facebook groups had forced the government of Jamaica to be more upfront with their constituents about this grave situation the country was in – a perfect example of status equalization as the Twitter and Facebook citizen groups inadvertently demonstrated a power over the government.  Media Specialist Marcia Forbes, in a column titled “Tivoli versus Twitter” in the Jamaica Observer writes about her experience at the time:


As we prepared to depart Norman Manley Airport, I questioned the immigration officer about the plane parked close to the cargo area. Rumours were that it was American and there to help Jamaica with extradition matters. The officer dispelled that by asserting that the plane was Russian and with supplies to Haiti. That piece of information got tweeted immediately. After all, it was from an authentic source and I was playing my part in quelling rumour-mongering tweets.
Stuck in the skies
By the time our contingent arrived in Antigua, word broke that "it" was on. None of us questioned what "it" was. We all knew. The state had moved against Tivoli Gardens. About 20 of us huddled in the plane exchanging the latest updates from home. We were heading to Barbados, ironically, to attend an academic conference themed, "The Everyday Occurrence of Violence in the Cultural Life of the Caribbean", hosted by the Caribbean Studies Association.
Twitter to the rescue
Twitter worked overtime as our plane sat in Antigua. Never again will I malign this social networking service or wonder about its value. It saved me from going crazy overseas while a section of my country was under siege.
For the first two days in Barbados, I was Twitter Queen. Many of the Jamaicans came to hear the latest. Mature men behind thick lenses peered on my BlackBerry, reading breaking news from local news media savvy enough to be on Twitter and disciplined enough to post regular updates. Following BBC and CNN on Twitter paid off handsomely, although they gave no joy with graphic details of activities in Jamaica. (Read rest of article here.)

Another good example of the power of Twitter comes from last year’s protests in Iran. Time magazine titled “Iran Protests: Twitter, the Medium of the Moment.” Time reported on the significant influence that Twitter had during the Iranian uprising of last year: 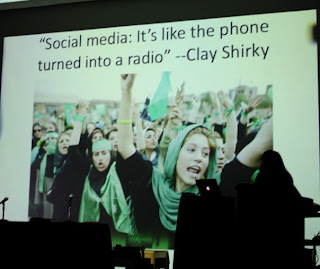 Twitter [is] practically ideal for a mass protest movement, both very easy for the average citizen to use and very hard for any central authority to control. The same might be true of e-mail and Facebook, but those media aren't public. They don't broadcast, as Twitter does. On June 13, when protests started to escalate, and the Iranian government moved to suppress dissent both on- and off-line, the Twitterverse exploded with tweets from people who weren't having it, both in English and in Farsi. While the front pages of Iranian newspapers were full of blank space where censors had whited-out news stories, Twitter was delivering information from street level, in real time. (Read full article here.)
The Jamaican and the Iranian examples show just how powerful social media is becoming - a strong wind at the back of citizen journalists and ultimately a benefit for the cause of democracy. News is no longer centralized in traditional media sites such as the established newspapers or television stations and it can no longer be controlled by governments. Arianna Huffington describes this shift in power in The Huffington Post Complete Guide to Blogging

: “The tech advances of the last few years have turned the news and entertainment worlds on their ears, shifting the balance of power away from media pooh-bahs dictating what is important and what is not, and toward consumers – and citizens – being empowered to choose and create.”  Citizen reporting on blogs and social media sites is holding governments accountable and forcing more transparency in areas where the citizenry never used to hold much power. I say, tweet on Twitterverse. . .tweet on!