This opening scene of the 1962 James Bond film Dr. No starts where Mr. Bond is picked up at the airport in Kingston, Jamaica by Mr. Jones, the driver (Jamaican actor Reggie Carter – who was a good friend of my father.) Mr. Jones drives Mr. Bond along the 14 km Palisadoes strip towards the city. Every visitor who arrives in Jamaica at the Kingston airport is afforded this wonderful drive toward the city. In the background are the Blue Mountains that overlook Kingston. On one side of Palisadoes is the open Caribbean Sea, on the other the calm waters of Kingston Harbor, one of the best deep harbors in the world. 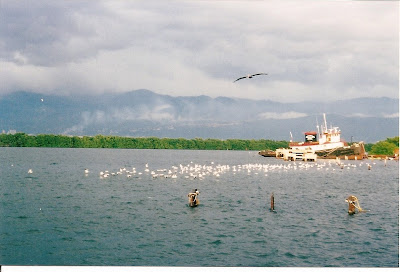 The Palisados strip holds good memories for me. As a child, I learned to swim at Morgan’s Harbor, in its sea water swimming pool enclosed by a boardwalk, boats bobbing in the background. My father used to take us to Port Royal at the end of the strip to eat curry lobster and learn about the “wickedest city on earth,” the haunt of pirates that sank in the earthquake of 1692. We would stop at the Giddy House, an abandoned old stone house that partially sank in the earthquake of 1907. Walking in the Giddy House would make you instantly dizzy and disoriented, which brought squeals of laughter from us kids. We would stop at the Plumb Point lighthouse and climb its steps for spectacular view of the city and the open sea. We would park the car at the end of the airport runway and watch the planes taking off and landing. And then there was nearby Cable Hut, a black sand beach just east of the Palisadoes strip at Bull Bay where my mother took me and my cousins every Sunday. My cousins surfed the wild waves that crashed onto Palisadoes from the Caribbean. In the distance you could see Lime Cay, a favorite spot for boaters on a Sunday. The rusted out old hull of a ship wrecked tanker gave an ominous sign that these waters were treacherous, however, Palisadoes in those days, offered a beautiful respite from the heat of Kingston. The wild Caribbean Sea side of the strip delivered constant sea breezes and sand dunes to explore. The quieter harbor side offered miles of mangroves and striking views of the city framed by the glorious Blue Mountains. 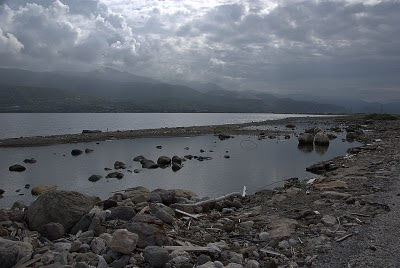 And now, it seems that the Palisadoes I knew is to be no more. Diana McCaulay, of the Jamaica Environment Trust has today written a disturbing blog post titled “The Destruction of the Palisadoes Spit” detailing the Jamaican government plans that include bulldozing the strip to make an expanded highway. Her post is well worth reading for all of the history she gives of this unique piece of land, as well as the more current events such as Hurricane Ivan that have affected the Palisadoes. A few highlights of her post:


On the doorstep to the city of Kingston in September 2010, you can see an environmental defeat. The Palisadoes spit, that jointed arm that holds Kingston Harbour in loose embrace, has been bulldozed by the National Works Agency (NWA), via their Chinese contractors and/or Jamaican sub contractors, led by the Minister of Transport and Works, with the willing and enthusiastic support of the National and Environment and Planning Agency (NEPA). At this point, it appears that the entire spit will be denuded of all vegetation, its beaches compacted, sand dunes destroyed, the few struggling strands of mangroves obliterated in order to construct or expand (it’s not entirely clear which) an utterly unnecessary road. . . . And then I got the phone call – Diana, there are bulldozers on the Palisadoes, and I drove out there, and I really did not expect to see what I saw, because I suppose I remain resistant to the reality of the scale of the damage that can be done to a strip of coast in a few hours by three bulldozers. But there it was – a swathe of annihilation far beyond anything ever visited on the Palisadoes by nature, virtually everything living on the Big Sea side simply mown down.
Where are our institutions, I wondered, where are those agencies set up to protect our history and our land? They fall like dominoes every time, their mandates ever in revision. Where are the voices of the academy, those who study places like Palisadoes? And where is it, I ask myself, where is it that we will finally refuse to destroy? Will we go into debt to raze the Blue Mountains, flatten Cockpit Country, dam Dunns River, fill in Blue Lagoon, pave over Font Hill, build a water park in the Royal Palm Reserve? If not, why not? Where is the line to be drawn and who will draw it?
What should have been done? radio interviewers ask me. The Palisadoes road had to be defended. We could have restored the groyne field after Ivan in 2004, I say, we could have graded the dunes and planted vegetation, we could have controlled the sand mining in Hope River to make sure sediment was replenishing the spit, we could have reafforested the watershed so that there was a steady release of silt to the sea, instead of silt and soil coming down in flood events in massive quantities, disrupting the currents. We could, in other words, have restored the same inexorable process that built the Palisadoes and will keep building it. But always, we prefer bulldozers. Read the full post here.
I echo Diana’s lamentations for Jamaica’s special places of natural beauty and the alarm at the lack of environmental consideration given to these places that are the heritage of all Jamaicans. If you would like to voice your concern for Palisadoes, please note the following email addresses:

Update Sept.16:
Please see comment from Diana McCaulay below where she is asking that anyone who has memories they would like to share about Palisadoes, to please do so as she will be collecting them. Please share anonymously if you would rather your name not be used.

Posted by Kathy Stanley at 7:34 PM