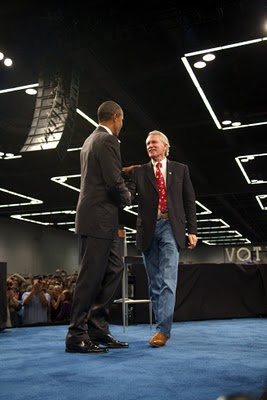 Dreams from my Father: A Story of Race and Inheritance

was my introduction in early 2008 to Barack Obama. His story of exploring his identity in the multi-cultural setting of Hawaii was poignantly and beautifully captured. I love a good memoir and this was a great one.

So naturally I wanted to go and see him speak when he was here in Oregon in April 2008 when he inspired 75,000 people at Waterfront Park, the largest crowd in his presidential campaign. Alas, I was getting on a flight to the Virgin Islands just when he arrived so I missed his speech. But he followed us to St. Thomas, taking his family for a weekend Easter vacation that coincided with my visit. Indeed, he played golf a few minutes away from where I was staying and damn! - we just missed him one afternoon on the way to the beach! We vacationed in Hawaii a year ago, staying in the small beach community of Kailua, ½ mile from where the President and his family spend their Christmas vacations. Fast forward to this year and I was in the Los Angeles airport in April when I caught sight of Air Force One landing to bring him to an event in L.A. Missed you again Barack!!!

Well, last night, the stars were in alignment and I was at the Oregon Convention Center to see President Obama give one of his electrifying speeches as he stumped for the next Governor of Oregon, John Kitzhaber. 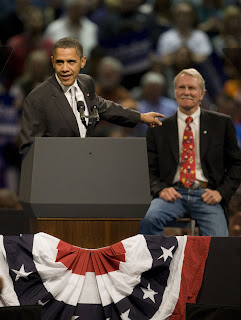 The hall was packed with the enthusiastic progressive crowd that predominates in this city. Organizers expected 5,000 and 10,000 showed up to demonstrate that there is no lack of enthusiasm in this mid-term election here. Kitzhaber is fighting a tight race against former basketball player Republican candidate Chris Dudley and Portlanders are engaged in this election. A Sarah Palin look-alike strolled through the line-up to get inside drawing laughs as she said her “you betchas,” and the crowd was happy and excited as we patiently waited for hours for the doors to open. Once inside, toddlers played with Kitzhaber signs, music blared and campaign workers revved up the crowd to build the excitement. China Forbes of the great Portland jazz group Pink Martini sang a beautiful rendition of The Star Spangled Banner to kick it off. After a few short speeches the crowd went crazy when popular junior Senator of Oregon Jeff Merkeley took to the stage accompanied by senior Senator Ron Wyden and Congressmen Earl Blumenauer and David Wu.

The debonair, former emergency room doctor and two term former Governor of Oregon John Kitzhaber then took to the stage wearing his signature sports coat, white shirt, blue jeans and cowboy boots. He was wildly cheered by the crowd that included many contingents of union workers, teachers and firemen. Kitzhaber highlighted the choices Oregonions face in this election and then introduced the man of the hour, President Obama. With U2 blaring in the background, the President made his way through the crowd to the stage with the whole room erupting in cheers and screams of support. The President started by saying he was glad to be back in Oregon – he referenced the support he received here in 2008 and the large crowd that came to see him at Waterfront Park. He said that his best friend from high school lives in Eugene, Oregon and is a Ducks fan. (University of Oregon football team) and that he’s always getting emails about how the Ducks are doing. However, he said, his brother-in-law coaches the Beavers in Corvallis, Oregon (Oregon State University football team). Of course all of that drew more cheers – Oregon loves their football and the teams have devoted fans that makes for a ‘Civil War’ rivalry that plays out each year in the state. Obama said he’s got the state covered.  It was a great speech, but I'll let you hear some of it for yourself:

Posted by Kathy Stanley at 9:05 AM