Jamaica’s coasts and vital mangroves have been under assault for decades from shoreline over development. Negril has seen its mangroves decimated over the years to make way for yet more large tourism projects. Now word comes that precious little Blue Lagoon in Portland has also fallen victim to one man’s selfish need to create his own beach. It may look pretty in the picture, but know that much killing of important habitat for fish and birds was executed to get this fake beach. Blue Lagoon is Jamaica’s largest spring-fed lagoon and an important marine ecosystem in its own right. I echo the concerns of the Blue Lagoon Restoration Project re-posted from their blog as follows:


The Blue Lagoon Restoration Project is deeply concerned at the actions of a private citizen to clear mangroves in order to construct a private, artificially inseminated beach.
Removal of first generation mangroves, undergrowth and decaying vegetation is a huge mistake which Portland Parish Council, NEPA and people like us must not allow to be repeated. Coastal degradation is an environmental and social issue of national importance. It represents a terrible cost to Blue Lagoon and to Portland's sustainable development and individual dreams.
Mangrove roots are underwater filters and cleaning systems that fishes and marine organisms require - much as trees and plants create oxygen and filter the air we humans breathe. Without clean water, fish die. Without clean water and air, animals and humans die. Decaying plant and animal matter become the soil we need for planting food that our lives depend on.
• mangrove roots underwater systems hide young fish (hatchlings) because larger predator fish cannot maneuver mangrove root nurseries
• all tree root systems help prevent erosion of soil surrounding blue lagoon, removing trees/plants causes hillside soils to wash away
• mangrove canopies (leafy branches) are home, nesting places, rest stops and housing schemes for birds, much like human settlements
• roosting, bird droppings fertilize the soil beneath their canopy, droppings include seeds and other nutrients and natural fertilizers
• bush, plants and undergrowth are home and safe haven for smaller creatures and microcosms
• chopping down trees and plants signals degradation of Nature's support systems sustaining OUR earth
• trees filtering systems create oxygen, roots help stabilize the soil, decayed plant matter creates new soil
• plants take their nutrients from soil and water
• our nutrients come from plants and other species in natures food chain
• when we kill off plants and other species, we are killing our own habitat, and inevitably, our species
Community focus and involvement is the only solution. I ask everyone concerned to help make certain no further damage comes upon the waters and shores surrounding Blue Lagoon.

The news out of Japan gets grimmer by the day. From the New York Times today:

[In] the past days, work at [Japan's] most severely damaged reactors, Nos. 1 through 3, has slowed, after the discovery of highly radioactive water around and inside the reactor buildings. Last week, three workers were injured after stepping into radioactive water at Reactor No. 3. The water has now accumulated inside the turbine buildings of the three reactors and is now making its way through separate underground tunnels and nearing the tops of their vertical openings, just 200 feet from the sea, officials say.

The radioactive ocean and all of the previous instances of dumping of nuclear waste in the ocean is the subject of Julia Whitty's latest post at Mother Jones. It is a sobering and appalling reminder of the environmental devastation we have unleashed by developing, testing and using nuclear bombs and nuclear energy. When will it stop? How many more lives have to be destroyed by radiation sickness? How many more deaths from cancers caused by radiation pollution? How much more catastrophe must be wrought on the earth? This affects all life on this planet. From Whitty's article:


The compass of news the past few days has swung to a new North—to the rising measurements of radioactivity in the waters off Japan's Fukushima nuclear power plant.
The transmission of radionuclides through the physical and biological webs of ocean and atmosphere is dynamic and far-reaching, since the contamination is carried by waves and winds and life itself.
Radioactive pollution in the ocean is nothing new. We've been loosing the stuff offshore since 1944. Here's how.
1) Nuclear weapons tests:
For example, at Bikini Atoll between 1946 and 1958, the US detonated 23 atmospheric nuclear bomb tests, including the first hydrogen bomb, which exploded far more violently than predicted and contaminated a swath of ocean 100 miles/160 kilometers away from the epicenter. The fallout affected inhabited islands, fishing boats and fishers at sea, and, obviously, a lot of marine life.
France exploded 193 nuclear tests in the atmosphere and in the waters of French Polynesia between 1966 and 1996. The tests began after the 1963 Partial Test Ban Treaty outlawing detonations in the air. I wrote about this in my book THE FRAGILE EDGE:
The [first] bomb was exploded aboard a barge in the [Moruroa's] lagoon, sucking water into the air and raining dead ﬁsh, corals, cephalopods, crustaceans, mollusks, and all the once living components of the reef onto Moruroa’s motu [islands], where their radioactive forms decayed for weeks. Confounded by this result, the French hastily arranged to explode their second bomb seventeen days later from an air plane 45,000 feet above the featureless South Pacific, some 60 miles south of Moruroa. Without people or equipment to witness, record, or analyze this distant blast, virtually no data was collected, making its detonation more an act of pique than science. Two days later, as described by the Bulletin of the Atomic Scientists:
An untriggered bomb on the ground [at Moruroa] was exposed to a “security test.” While it did not explode, the bomb’s case cracked and its plutonium contents spilled over the reef. The contaminated area was "sealed" by covering it with a layer of asphalt.
2) Sinking of nuclear-powered submarines:
So far, eight nuclear-powered submarines have sunk or been scuttled: two American, four Soviet; two Russian.
Four in the North Atlantic, three in the Barents Sea, one in the Kara Sea north of Siberia.
Another accident in 1968 in the North Pacific 1,796 miles / 2,890 kilometers northwest of the Hawaiian island of Oahu led to the sinking of a diesel-electric Soviet sub sank carrying nuclear ballistic missiles.
3) Spacecraft and satellite failures, including:
The launch failure in 1964 of an American navigation satellite with an onboard radioisotope thermoelectric generator (RTG)—an electrical generator fueled by radioactive decay. This fell into the ocean near Madagascar and deposited a quantity of plutonium-238 equal to half the amount of plutonium-238 naturally present in the entire World Ocean.
The failed Apollo 13 mission (1970) jettisoned its Lunar Module Aquarius with the intention that it would crash into the sea and plummet into the Pacific's Tonga Trench—one of the the deepest places on our planet—since it was still carrying its RTG with plutonium dioxide fuel. So far no plutonium-238 has been recorded in nearby atmospheric and seawater sampling, suggesting the cask is currently intact on the seabed.
At least four other RTG-powered spacecraft have fallen to Earth, including one into the waters of the Santa Barbara Channel off California in 1968.
Between 1973 and 1993, at least five Soviet/Russian RORSAT satellites failed to eject their nuclear reactor cores prior to falling back to Earth. One fell into the Pacific north of Japan (1973), another over Canada's Northwest Territories (1978), another in the South Atlantic (1983). The successfully ejected cores are in still orbit, destined to plummet back to Earth someday.
4) Discharges from nuclear reprocessing and power plants:
Britain's Sellafield (aka Windscale) is a nuclear storage site, an erstwhile nuclear weapons production plant, nuclear reprocessing center, and nuclear power plant, currently in the process of decommissioning. Due to accidents, chronic emissions, and overflows at Sellafield, the nearby Irish Sea is deemed the most radioactive sea on Earth.
The Hanford Site in Washington—home to the world's first plutonium production reactor—purposely released radionuclides down the Columbia River from the 1940s to the 1970s. The contamination travelled hundreds of miles into the Pacific Ocean. Today the radionuclides are used as markers by oceanographers tracking sediment movements on the continental shelf.
5) Ocean dumps:
Dump sites for radioactive waste were created in the northeast Atlantic (1 site), off Europe (3), off the US eastern seaboard (1), and off the US Pacific coast (1).
Between 1946 and 1970, the US dumped ~107,000 drums of radioactive wastes at its two sites, including some 47,800 in the ocean west of San Francisco, supposedly at three designated sites. However drums actually litter an area of at least 1,400 square kilometers/540 square miles, known as the Farallon Island Radioactive Waste Dump, which now falls almost entirely within the boundaries of the Gulf of the Farallones National Marine Sanctuary. The exact location of most drums is unknown. At least some are corroding.
A 1996 paper in Health Physics described some of the radionuclides found in the tissues of deep-sea bottom-feeding fishes—Dover sole, sablefish, and thornyheads—plus intertidal mussels in the waters around the Farallon Islands:
Concentrations of both [plutonium-238] and [Americium-241] in fish tissues were notably higher than those reported in literature from any other sites world-wide, including potentially contaminated sites. These results show approximately 10 times higher concentrations of [plutonium-238+240] and approximately 40-50 times higher concentrations of [plutonium-238] than those values reported for identical fish species from 1977 collections at the [Farallon Islands Nuclear Waste Dump Site].
Of course the fallen satellites, the sunken submarines, the leftovers from nuclear bomb tests, and the dumped drums of waste are all subject to saltwater corrosion and the same destructive tectonic forces that triggered the March 11th Sendai earthquake and tsunami. ~Julia Whitty. See full post here.

A Caribbean Wonder: The Baths at Virgin Gorda, BVI 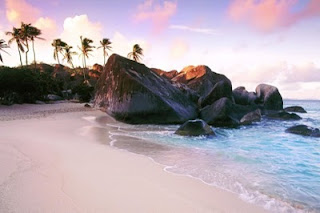 Giant boulders tossed around on a white sand Caribbean beach, trails through the rocks lead deep into mysterious green grottoes filled with pools of crystal turquoise saltwater, all ending in a pristine paradise for snorkelers. 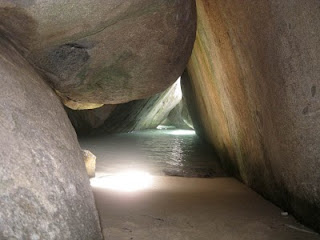 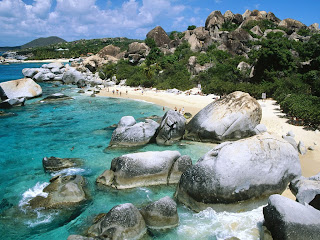 I had my first visit to The Baths at Virgin Gorda last week and this unique Caribbean wonder lives up to its legendary reputation as the place to visit in the British Virgin Islands. Left over from an ancient volcanic eruption, the boulders strewn around this side of the island of Virgin Gorda form unique pools cradled between the two beaches of Devil's Bay and Boulder Beach. The snorkeling is very good here however, as this is a north facing beach, it is subject to a swell in the winter months and swimmers have to be careful. I was lucky to be able to swim the day we were there and the water is amazing. 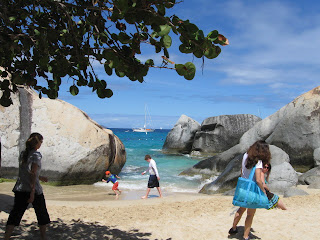 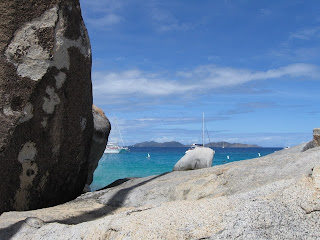 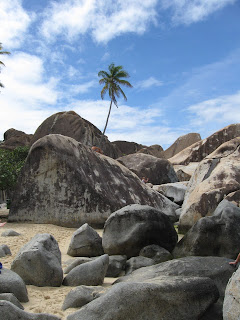 Take Nuclear Giveaways Out of the Budget

Like the rest of the world, I have been riveted by the news out of Japan. The triple calamity of a massive earthquake, tsunami and a severe nuclear crisis is too much for one country to bear. I pray for the grieving, the displaced and for the quick resolution of the nuclear crisis. I join Greenpeace in their advocacy efforts to press the President and Congress to cut the proposed $36 billion in tax giveaways proposed for the nuclear industry. The text of their letter addressed to the President and Congress: