Runaway carbon coupled with failure of UN Climate talks means: We’re on our own.

Act locally, 'cause your government is not there for you. 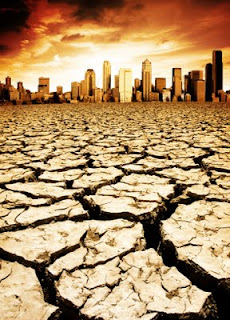 “We’re on our own.” That’s the stripped down conclusion I’ve reached about where we’re heading on climate change, given political inaction and corruption at the federal level in the U.S. This month I completed a presentation on the U.N. Climate Talks to fulfill requirements for a Certificate in Conflict Resolution from my alma mater, Marylhurst University (what better conflict to study than the beleaguered, intractable climate talks).  Daily headlines informed my research and have made me less optimistic about the prospects for any success at the U.N Climate Talks. COP 17 is slated for December this year in Durban, South Africa. With the expiration of the Kyoto Protocol agreement next year, and the evidence of our changing climate on daily display, (hello extreme tornadoes in U.S mid-west; extreme flooding in Pakistan, Australia, and Caribbean countries last year to mention only a few) it would be logical to assume that everyone, every citizen of the world, every country of the world, would be united in wanting to come to agreement about reducing carbon. Of course, like me, you would be altruistic, perhaps naïve if you had such a thought.

There is no debate anymore about climate change. It is here. Look around. Pick up a newspaper. Extreme weather events are everywhere. No part of the globe is unaffected now. Everyone is talking about it. If you’re not, then you’re not paying attention. Watch this startling video to see how the Caribbean could be re-shaped by rising sea levels.  Goodbye downtown Kingston, Jamaica where I was born.  Goodbye Jamaica's major airport, the Norman Manley International Airport.  Goodbye the Palisadoes strip where the airport is located. If sea level were to rise only 1 metre in the Caribbean, the impacts would be catastrophic.  21 Caricom airports would be lost. Nearly 1,300 square kilometres in Caricom countries would be lost and 110,000 people displaced. Caribbean countries that would suffer the greatest economic losses would be the Bahamas, Guyana, Trinidad and Tobago and Belize.

Scientists are united that human-caused climate change is here due to the dangerous rise of carbon in the atmosphere. The consensus is that we need to be at 350 parts per million of carbon in the atmosphere for the climate to be stable. We have not been at 350 parts per million since about 1987! We’re at 393 ppm as of April 2011.

And steadily rising. How’s this for a headline in today’s Guardian:


Worst ever carbon emissions leave climate on the brink
Record rise, despite recession, means 2C target almost out of reach
Economic recession has failed to curb rising emissions, undermining hope of keeping global warming to safe levels.  Greenhouse gas emissions increased by a record amount last year, to the highest carbon output in history, putting hopes of holding global warming to safe levels all but out of reach, according to unpublished estimates from the International Energy Agency.
The shock rise means the goal of preventing a temperature rise of more than 2 degrees Celsius – which scientists say is the threshold for potentially "dangerous climate change" – is likely to be just "a nice Utopia", according to Fatih Birol, chief economist of the IEA. It also shows the most serious global recession for 80 years has had only a minimal effect on emissions, contrary to some predictions.
Last year, a record 30.6 gigatonnes of carbon dioxide poured into the atmosphere, mainly from burning fossil fuel – a rise of 1.6Gt on 2009, according to estimates from the IEA regarded as the gold standard for emissions data.
"I am very worried. This is the worst news on emissions," Birol told the Guardian. "It is becoming extremely challenging to remain below 2 degrees. The prospect is getting bleaker. That is what the numbers say."
Professor Lord Stern of the London School of Economics, the author of the influential Stern Report into the economics of climate change for the Treasury in 2006, warned that if the pattern continued, the results would be dire. "These figures indicate that [emissions] are now close to being back on a 'business as usual' path. According to the [Intergovernmental Panel on Climate Change's] projections, such a path ... would mean around a 50% chance of a rise in global average temperature of more than 4C by 2100," he said.
"Such warming would disrupt the lives and livelihoods of hundreds of millions of people across the planet, leading to widespread mass migration and conflict. That is a risk any sane person would seek to drastically reduce."
Birol said disaster could yet be averted, if governments heed the warning. "If we have bold, decisive and urgent action, very soon, we still have a chance of succeeding," he said. Read rest of article here.
Ah, I like that: “Bold, decisive and urgent action, very soon.” How quaint. Dear Dr. Birol, come and see what we deal with in the United States for elected officials. In the most wealthy, most developed country in the world, the country responsible for 25% of the carbon emissions in the atmosphere, our elected clowns in office give us bold, decisive and urgent action AGAINST doing anything on climate change or lowering carbon emissions! The Governor of New Jersey just announced he plans to pull the state out of a multi-state initiative to reduce greenhouse gas emissions. The Governor of Texas suggests that the solution to drought in his state is to “pray for rain.” And the lovely U.S. House of Representatives is working to dismantle the Clean Air Act.

More headlines offer evidence that the U.N. Climate Talks are going nowhere fast. The U.S. Envoy for the talks said in April that the talks are “unworkable.” And the United Nations head of the U.N. climate treaty secretariat said in simple terms what everyone knows: “Washington's inaction on climate legislation is a "very serious hand brake" on world efforts to combat global warming.” So there you have it. Forget the U.S. government. As the Union of Concerned Scientists said in a recent statement:


Instead of standing in the way of progress, Congress should stop pandering to the deep pockets of the fossil fuel industry and allow the EPA to protect the public’s health from global warming, while also enacting the comprehensive climate and energy legislation the country needs to build a clean energy economy, create jobs, protect the environment, and ensure a healthy future for our families.
Which leads me back to: “We’re on our own.” And if you are a small island nation with full knowledge that you are headed for disaster, better act on your own to mitigate your losses.  Fortunately, some U.S. states and cities get it. And that, in my opinion, is where the “bold, decisive and urgent action,” will take place in the United States. Not at the federal level. Not in states with GOP governors who are beholden to their fossil fuel industry paymasters. But in cities like Chicago, which is "preparing for a permanent heat wave" and doing extraordinary work to prepare itself for climate change. In bike-friendly cities like Portland, Oregon, where, “on a per capita basis, [carbon emissions] have fallen by 17% since 1990. And last but not least, in citizen initiatives: installing solar panels, eating locally produced food, joining in climate action group efforts such as 350.org and lowering our individual carbon footprints as much as possible.  Maybe it's going to be the "Kids versus global warming" team who will get us through this.  If only we had such enlightened leadership in Washington.

Posted by Kathy Stanley at 6:45 PM