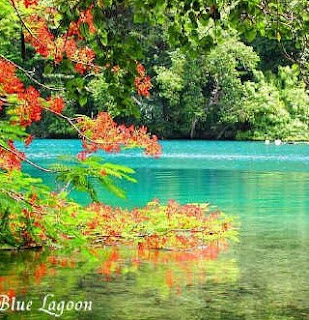 Yesterday the Washington Post published an Associated Press story on the struggle for Blue Lagoon which is under threat by developers:


Battle brews over development of Jamaica’s Blue Lagoon, one of island’s best known attractions
PORT ANTONIO, Jamaica — In a lush corner of Jamaica, a skirmish is under way over a spring-fed lagoon where the changing light of day turns water from shimmering jade to brilliant cobalt.
Tree-fringed Blue Lagoon is a dazzling, 400-foot-long (122-meter-long) teardrop of water that meets the Caribbean along a coast that was once a hideaway for the rich and famous and a setting for a film starring Brooke Shields.
The little lagoon’s shore already is marred by an abandoned, hurricane-damaged restaurant and a crumbling helicopter pad, and a new development is alarming conservationists who are trying to save one of Jamaica’s most gorgeous natural attractions. The owner of a small hilltop hotel overlooking the lagoon has carved away a pocket of forest and mangroves to create a private, white-sand beach that activists fear could spoil the unique environment.
In most places on the tourism-dependent island, where politicians mostly view the conservation lobby as a hindrance to economic development, a small beach cut out of mangroves would hardly merit notice. But the Blue Lagoon isn’t just anyplace.
It’s a rare environment where the warm waters of the sea mix with fresh water from cold mineral springs in a 186-foot-deep (57-meter) sinkhole. Yellow-billed parrots spread their wings to dry after rain showers. Small blue fish dart around the shallows. Black-and-scarlet frigate birds swoop overhead.
The cove was first described in an 1864 journal published by photographic pioneer Adolphe Duperly. The Frenchman’s pictures of Jamaica were a hit at a Paris exhibition and helped the Blue Lagoon become a destination for travelers.
The lagoon and the wider Port Antonio area were once favored destinations of European aristocrats and film stars like Errol Flynn, whose widow still runs a cattle ranch nearby. But it has seen a steady decline in tourist traffic since its 1950s heyday.
Blue Lagoon still attracts bird-watchers and nature lovers who want experiences off of the beaten track, though it’s hardly been a priority for recent Jamaican governments due to its relative isolation and lack of foot traffic. Just outside the cove, about a dozen luxury villas line the shore.
It is often known as Blue Hole to locals, but the alternate name came into wider use after the Brooke Shields movie “The Blue Lagoon” was partly filmed there, though her famed swim scene was shot elsewhere.
The Jamaica National Heritage Trust has completed historical research to potentially declare Blue Lagoon a protected national monument. But Lisa Grant, legal officer for the government body, said more rigorous evaluations are needed before any official declaration can be made.
They need to “make sure the economic activity around the site does not compromise the integrity of the area,” she said, a reference to development and boat tours around the cove. It is not clear how long their assessments might take.
During a recent visit to the cove, the chief of the local Portland Environment Protection Association, Machel Donegan, said the area is a “very special, unique place so development on it should not be allowed.”
Environmental activists have been pressing politicians to save the cove, while blasting regulators. They say government approval of the beach is evidence of a broader failure of environmental protection on an island where many see jobs as more important than strict conservation. Read rest of article here.

I saw this on Keith's show a few days ago but it's much better with the soundtrack:

Posted by Kathy Stanley at 8:36 AM 0 comments